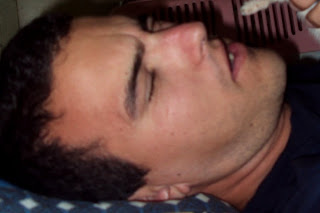 Since I have no TV, I’m constantly afraid of running out of stuff to watch, so I tend to ration my TV viewing. But last night, Phil and I splurged. We watched one episode each of “It’s Always Sunny in Philadelphia,” “Rome,” “Mad Men,” and “Eastbound and Down”. We set Phil’s laptop on his kitchen table and watched while we sat in plastic dining chairs. Not too far into “It’s Always Sunny…”, I shut of the lights, and almost immediately termites started landing on the screen of the laptop. Phil remedied the situation by turning on the light in the bathroom, to which the termites swarmed; however, the mosquitoes refused to relent.

When the 3-hour TV marathon concluded, cleaned up and started to get ready for bed, and Phil found the source of the mosquitoes: the backdoor to Phil’s house was open the entire time. Like the ones at my house, Phil’s screen doors are not completely sealed, and when the lights in the house are on and the door isn’t completely shut, unwanted guests invite themselves in.

Not too long after that, we settled into bed, Phil in his bedroom and me on the living room floor. Against Phil’s advice and my own better judgment, I didn’t light a mosquito coil. Mosquito coils are flat, cardboard-like discs that, when lit with fire, burn slowly and emit mosquito-repelling smoke. I neglected to light one last night instead relying on the electrical fan to create a draft strong enough to deter the pests.

The fan didn’t work. Within 10 minutes of laying down for the night, I had 3 huge bites on my right wrist and one to match on my left. At that point, I realized my folly and put on a t-shirt, covered up with an ’ie, and went so far as to spray insect repellent on my forearms.

Mosquitoes are crafty little bloodsuckers, and they will exploit whatever gap in security they can find. For me last night, it was my feet. An ’ie is roughly 2 yards of fabric, which isn’t enough to be an effective bed sheet. My feet inevitably exposed themselves during the night, and sometime around 3:00 or 4:00 a.m., I woke up to a throbbing itch on the bottom of my left foot.

I don’t know whether it’s the rude awakening or the depth of the mosquitoes’ puncture or the chemical makeup of the venom, but fresh bites in the middle of the night seem to ache more than they itch. In fact, the throbbing and the aching seem to exacerbate one another. I often feel that if it was just the pain or just the itch, my brain could adjust to the discomfort and move on. But the two in combination are too much for my brain to ignore. But when I’m faced with 3:00 a.m. mosquito bites, I still try in vain to distract my mind from the pain. Sleep! Sleep! I try and will myself.

The strangest part of all this is how my body has developed an immunity to the venom. By the time I woke up this morning, there was no trace of any bites on either of my wrists nor my foot. The pain and the itch are gone, and all the overnight bleary-eyed trauma feels like nothing more than an extremely unpleasant dream.

But it’s early tonight, and I’m already feeling sleepy on account of all the waking up in the middle of the night last night. Sleep deprivation is now the most lasting mosquito-caused malady.

I should have used a coil.

I this weekend has left you well-rested. Pictures below. 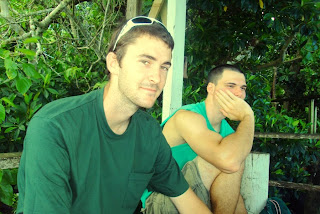 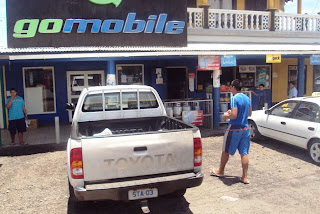 The GoMobile Store in Salelologa on Saturday.