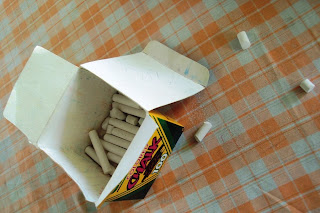 I remember the chalkboard in the band room during middle school. Mr. Tatum had a special wooden tool that held five pieces of chalk equidistant from one another so he could draw musical staffs when need be. And I remember coming back to school after summer—I forget which particular summer—when the blackboard and chalk had been replaced by a whiteboard and markers. The tool had been adjusted to fit the wider width of markers. And the transition was complete.

It’s weird to come back to chalk. On one hand, it’s those perfectly cylindrical sticks that you remember so well, and on the other hand it’s yet another of those things you perceived a certain way when you were younger that turns out to be completely different years after the fact.

My own learning curve with chalk has progressed slowly with this school year. Inevitably, the first thing I noticed was a fresh piece of chalk, 3.5 inches in length, needs to be broken at least in half before it can be properly wielded. And even then, it tends to break unless it’s halved again. Writing with a 0.875” piece of chalk becomes like playing guitar with a disappearing pick. You keep going and going until the strings feel like they’re scraping layers off your fingertips.

For a while I thought our school was buying defective chalk that had small scraps of rock baked into the sticks. It wasn’t until fairly recently I realized pieces of chalkboard were embedding themselves in the chalk. Chalkboard on chalkboard is one of the worst feelings in the world, and at one point yesterday I had to recoil and allow the nastiness to roll down my spine.

And then there’s the inherent dryness. I start the morning fine, and by Interval my hand are all dry and puffy and nasty. And the dust. Sure, you can pat your hands and your clothes, but there seems to be a never-ending supply of dust.

One thing that’s nice is my school seems to have a large supply of colored chalk, which is fun. In my attempt to stimulate the visual learners, I use the colored chalk whenever I can. It’s to the point now where I can coordinate color by sub-topic, and then repeat that color scheme from class to class.

With my computer being down lately, I’ve been using whiteboard markers in my computer lab. And I do have to say the markers aren’t nearly as sexy as the chalk. The markers are finicky and oily and frail. My handwriting is more smooth, but it doesn’t have the feel, the sound, the uneven trail.

Whatever it is, I can’t help enjoying the ironic juxtaposition of teaching computer classes with chalk and a chalkboard. In the “Environmental Conditions” lecture, there was even a point at which I would write on the board, “Keep dust to a minimum by using a whiteboard.” It felt like I was betraying a medium. It felt wrong, and yet so right. 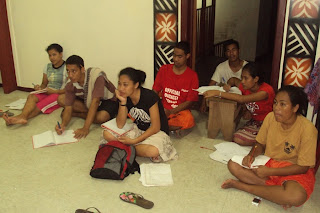 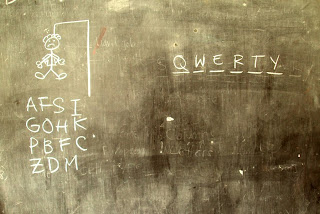 Most difficult Hangman ever.

Is QWERTY a word? I think someone is cheating!

i have to go cut my nails now because now the sound and the FEELING after the sound is in my head. all this after only one word "chalkboard"

I teach in the suburbs of Sydney Australia... I only just got a whiteboard(as in three weeks ago)its also a second hand job but friends and family in other professions always seem to scoff at my joy in receiving this "new" piece of classroom "hardware" when they have been exposed to corporate desks, the latest computers, chairs that were not made in 1956 and held together with sticky tape and oh my gosh those machines where you can watch things projected onto the wall!!!
I am so feeling you on this chalk post;)