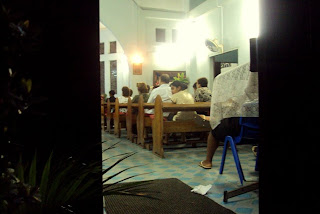 For a short time in college, I wanted to be a religious studies major; not born out of any strong religious views of my own, but more out of an academic curiosity. While I was raised in a progressively Catholic family, I find other faiths just as fascinating. And just as the Peace Corps is a cultural exchange of sorts, I enjoy a good religion exchange when I can find it. And since a bunch of the Christian churches in Apia get together for an ecumenical gathering once a month, I’ve been meaning to go. Also they serve dinner after.

In the announcements at the end of mass this morning, it was announced that this month’s gathering would be held tonight at the Anglican church. As I always have in the past, I briefly considered going, and then figured that the hour of mass I’d already attended was enough organized religion for this week. But then one of my friends in the Mulivae Youth program texted to let me know they were planning on going to the ecumenical service tonight after the weekly youth meeting. Also I’m over budget for the month and my refrigerator is empty. So I decided to give it a shot.

I showered and shaved and headed to the 7 o’clock service. I showed up to the church and immediately got my first lesson of the evening in Comparative Religion: Anglican is not the same as Protestant. I pass the Protestant church all the time, and when they said it was at the Anglican church, my mind didn’t process the difference.

So there I was standing at the Protestant church all alone. Just me and the crickets. At the neighboring hotel, I asked for directions to the Anglican church. It turns out I had walked completely the wrong direction from my house. Luckily I had about 20 minutes before the event was supposed to begin.

40 minutes later when I was standing at the gates of the Mormon church up the hill from the National Hospital, I decided I must have missed something. I was feeling foolish and hungry, and I’d decided to go on a whim, and I’d pretty much given up. And walking down the hill, I looked across the street, and there, a ways back from the road next to the gas station the concierge had mentioned, was the Anglican church. I was 24 minutes late.

With approximately 60 people in attendance, the gathering was relatively small, and I felt conspicuous when I tried to quietly slip into the back. But people were friendly enough.

From what I could gather, I think 4 churches in the area participate: the Catholic Community at Mulivae, the Protestant church, the Anglican church, and Peace Chapel in Vaimea. Ecumenical services are great and awkward. The people who show up are clearly passionate enough about their faith to show up, but they’re also secure enough to accept the faiths of others, which is cool. And then occasionally you get that feeling that people are walking on eggshells, and the fragility of comparative religion is palpable.

Whatever, you sing a couple songs, you say a couple prayers, and everyone feels like family. And then it was time to eat.

There was cake and doughnuts and sausage dumplings and breaded fish and sandwiches. And there was crackers with tomatoes and brie, which no one seemed very interested in. I probably had 14. They were delicious. And then a couple Aussies from Peace Chapel, Paul and Tim, chatted me up.

With my belly full and my Gnostic curiosity sated, I headed home. 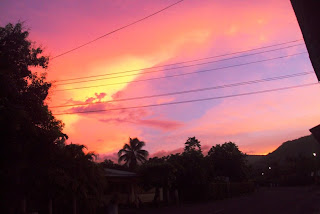 One nice thing about the Anglican/Protestant mix-up was the sunset. I usually save sunset photos for Thursday, but there's been an abundance lately.

All that walking will build up an appetite. Beautiful sunset. Peace be with you Matt. :)

Wow... what a beatiful picture of the sunset.

OMG you're thinking like a local! If there's food we'll come :D