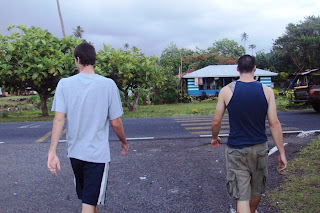 I’ve ventured across the strait to Savai’i for the weekend for no particular reason other than I haven’t been here in a really long time. The last time I came to Savai’i it was with my parents back in May. I went to New Zealand after they left, but from the time I arrived back in Samoa on June 1 until today, I’ve been on Upolu. I never lived on an island until I moved here, so I have no previous experience with which to compare. Is not leaving an island for 5+ months the same as not leaving Union City? The East Bay? I probably did stretches growing up where I didn’t leave the East Bay for months and months. In any case, I haven’t had any sense of “island fever,” so it’s probably not worth talking about.

I’m staying at Phil’s tonight, as is AJ. It’s always fun when volunteer guys get together because it ends up being shameless bachelorism. Usually when I’d get together with other single males in The States, we’d go out to a restaurant for food and keep our bizarre dining-in habits to ourselves. But in Samoa, restaurants mostly only exist in Apia. So we eat in.

AJ was already here at Phil’s when I got here. “What do you guys want to do for dinner?” Phil asked. AJ, thinking ahead, brought a box of Kraft Deluxe Macaroni and Cheese Dinner. This provided a good start, but was probably not enough. So we headed up the street to the Tuasivi grocery store.

It’s clear I haven’t been here in a while. The Tuasivi grocery store was a thriving faleoloa when I was here last, but they’ve remodeled, put in tile flooring, and installed a turnstile at the door. It’s a swanky little place.

Inevitably one or all of the following gets suggested (or combinations thereof):
AJ suggested tuna tonight, an idea which I shot down before it was allowed to marinate. I have graduated from a life of picky eating, but when it comes to canned tuna, I will dig my heels in.

In the end it was decided we should just get extra pasta shells and use the same cheese from the box. We also picked up some canned pears and 3 bottles of Coke. And AJ got a can of Chilli Cheese Fritos.

And that is what we ate. The pasta was divvied up into equal portions, and the canned pears were dumped into a single bowl, left on the kitchen counter, and consumed while the three of us stood in a circle around the bowl. There was grunting. 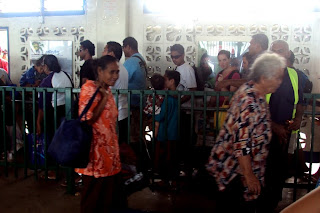 The line to get on the boat. Look closely and you can see Blakey and Koa. 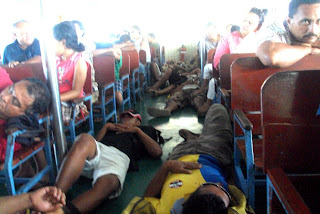 People sleeping in the aisle on the ferry. 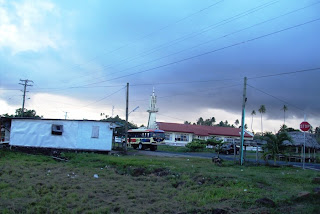 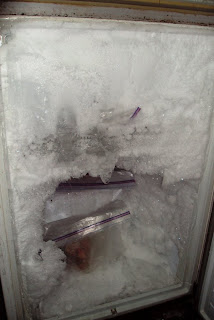 Phil's freezer, which had a cameo in Empire Strikes Back as the ice planet Hoth.

Woah @ Ferry picture, still the same from the last time I went on that ferry.
p.s My friends and I love reading your blog, keep up the good work.
Manuia le aso!!