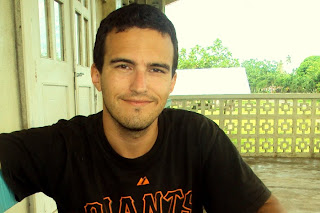 Before my parents came to visit, I warned them there was little in the way of healthy eating out in Apia. There are a couple Chinese restaurants that serve a seasonal vegetable plate and there’s The Curry House up the hill, which specializes in seemingly healthy Indian cuisine, but beyond that it’s difficult to go out for a healthy meal. It’s difficult to find a salad in this town—nearly impossible—and on the off chance you do, there’s a good chance it’s been doused in mayo-heavy dressing. More than anything else there’s a helluva lot of fish and chips available on the island, much to the dismay of arteries everywhere.

The last couple months have been busy, and with volunteers coming and going, I’ve been eating out pretty often. Inevitably, this has mostly meant a lot of pizza with a burger here and a fish and chips plate there. And I think I’m starting to feel it.

In the 10 or so months leading up to my Peace Corps departure, I lost a fair amount of weight. I was talking to some friends at church this past Sunday, and we got on the subject of driver’s licenses, and everyone in the group passed theirs around. I always carry mine in my wallet, but I haven’t taken it out and looked at it in a while, and I was as surprised as everyone else was. Back in early 2006 when the picture was taken, I was a big boy.

“You weren’t fat so much as overweight,” Trent told me last night. When I suggested the word ‘puffy,’ he nodded in agreement. “Yeah. Puffy.”

So for whatever reason—maybe a New Year’s resolution?—I started working off the pounds in early 2008. I started eating more sensibly an attending the gym more frequently, and the difference was pretty significant. And as fun as it was to have people at work notice that I was looking more slim, the best part was I just felt better.

So… In joining the Peace Corps, volunteers were pretty blunt about the fact that girls tend to gain weight in Samoa while boys tend to lose it. And while I’ve seen no evidence to the first part of that statement, I dropped ~15 pounds during training, but since I moved to my permanent site I gained 5 pounds back, and I’ve been pretty steady ever since.

But lately I haven’t been feeling a little blah. My weight is still at a good place, but I can feel the pizza and the French fries and the deep-fried fish taking their toll. And the alcohol. So I think I’m going to start running more often. I was running a lot in the lead-up to our big relay race at the end of August, but the regimen has dwindled since then.

But just so you know, the fish and chips at the Fish Market are excellent. I highly recommend them. Get there early so you can get yourself a niu. 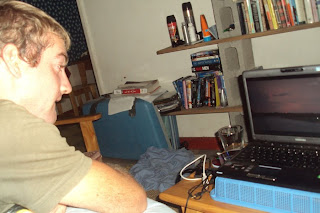 Trent and I watched "Up" last night. 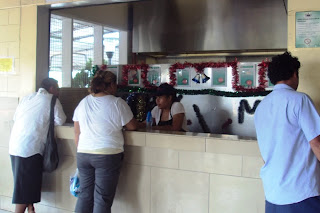 Uncle Bill's Takeaway outside Farmer Joe has Christmas decorations up. I haven't tried their fish and chips. 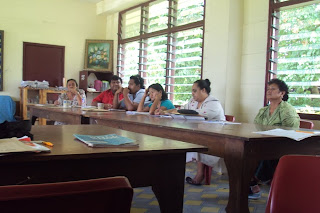 Today we had a 2-hour impromptu staff meeting in sweltering heat. Look how happy everyone was to be there.

Oh, I'm leaving for Samoa next week, I will try that one out when I get there... (Fish & Chips) at the Fish Market... sooooo can't wait.

Before leaving Samoa the only salad I ever saw at the family toana'i was the cucumber one in a sweetened dressing and maybe the odd coleslaw now and then.

The green salad with capsicums and tomatos never made an appearnce despite the availability of various edible green leafy vegetables at the market.

Anyway Fish and Chips are great, but Im more partial to the 'Sunrise' takeway selection of family favourites.

The best heathy eating option you have in Samoa is the fresh tropical fruit selection available for breakfast.

maybe you should visit your 'family' a bit more for a home-cooked meal? or just include more papaya, mangoes, oranges. a typical samoa salad is cucumbers cut long ways and tomatoes. goodluck matt.

looking at this post's pic and the 'about me' pic you have slimmed down. definitely get into cucumbers and tomatoes - my beloved grandma swore by it!