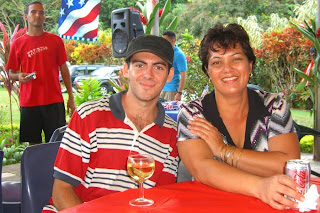 I had my mid-service Peace Corps medical interview today. It feels weird to attend a doctor’s appointment that had been tentatively setup a year ago. Group 82 is in town right now, and all of them were huddled in and around the Medical Officer’s office waiting to get their second rounds of shots for Hepatitis-A or B or flu or whatever. I sat in the waiting room and awkwardly idly chatted until it was my turn. Is it just me, or is all waiting-room conversation inherently awkward? Maybe not as much as chatting at the urinals, but nearly.

In any case, Teuila started off my verbal check-up by pointing out she’s barely seen me since training. I told her that I wasn’t allowed to get sick growing up, a statement that usually gets a little laugh but which my sister and I take somewhat seriously. Just about all the stuff in my thin medical record had to do with eye infections from my stupid contacts. Teuila was happy to hear I was wearing them less.

I will save you the details of much of my medical visit, but I will say that the state of my water filter came up. Apparently another volunteer found the grime in my water filter horrible enough that the subject needed to be reported to the PCMO. I think Teuila mostly thought this was funny, although she did make a point to check it out for herself when she came for a site visit. She brought it up again today, and I assured her it was fine. And besides, I’m due to get a brand new filter in 2 or 3 weeks.

We agreed that I was healthy, but that I should exercise more.

And then the subjects of shots came up. Teuila noticed that I still needed my second round of the Hepatitis-A, and while we were at it, she wanted to give me my flu shot.

I’m not a scientologist, but my plan is to respectfully decline flu shots until I’m in my 40s. Until then, I figure my immune system should do the job it has evolved to do. So I told Teuila I as a conscientious objector.

So after the interview concluded, we headed over to the lab side of her office where she broke out the needles and lined up the two shots. When the Hep-A shot was finished, she said, “See? That wasn’t so bad.” But I have no problem with shots! Back in The States, I gave blood constantly. The Red Cross has been hounding my parents about my whereabouts since I left. I can handle a needle. My issue with the flu shot is wholly a matter of principle.

By the time I was finished with my diatribe, Teuila had finished administering my flu shot. I was free to go.

And with this strengthened immune system, I feel like I can go wherever I want. Try and stop me, germs. 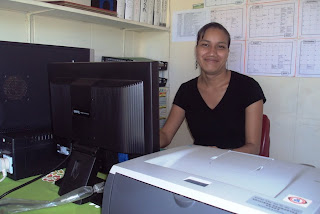 I had to set up my computer in the secretary's office because the only outlet in the teachers' lounge was being used. Faalau, the secretary, demanded I take her picture.

Didn't you already receive the Hep-A series? or was that something else? Anyway, Amanda got the flu shot this week too! You're right. You two were not allowed to get sick and for the most part you both obeyed that "rule." I'm grateful for healthy kids.

My kids had to have blood coming out of their eyes and their hair on fire before I would let them stay home from school. Mine had to be truly sick before I allowed them to be sick as well! But then again, I am grateful that I had healthy kids too. Hope you stay that way Matt!

you should take them considering you're in the islands. we had a family reunion in samoa, and one member caught denghue fever even though she was sure she had all her shots done.