Doesn't It Seem a Little Precarious? 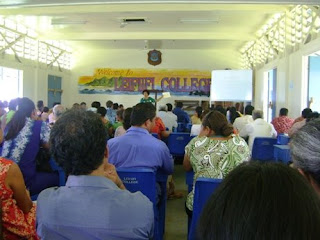 Now that we’ve fallen into a bit of a routine, I sometimes get reminders that all arrangements are tentative. I guess this is also true in The States, but I think it’s a little more jarring to be thrown off the beaten path here. There’s no Target, there’s not much food open late, and there’s no voice of reason to say, “Hmmm… Maybe we should schedule this meeting for after school.” The precariousness my situation made itself known through 2 things in the last 24 hours.

First, I ran a fever for most of the day today. I had coffee during the Oscars yesterday, and that’s my prime suspect at this point. I was all queasy last night, and then came the chills and dizziness. And I had really weird dreams last night, although I’ve forgotten them.

In any case, being sick here is just kinda weird. Part of it is the general mugginess of each day. It’s hard to know where the perpetual Samoan sweating ends and the feverish cold sweats begin. I also get really exhausted, but much of my life here straddles the line between laziness and “laid back”. Also, I probably should get more sleep.

The second thing, which is far less dire (not that the fever is all that dire… it’s come and gone now), is after this morning’s assembly, Maegi approached me and told me that we needed to go to a meeting at the secondary school across the street at 1:30 p.m., and that I should end my last class early accordingly.

This was a bit strange to me, but it was only cutting 10 to 15 minutes off my last class of the day, which seemed harmless. And then Koa texted me and said he was coming. And then when I got out of my last class, Phil was standing around waiting to head over to the meeting.

They called Phil last night at 9:30 and told him that he needed to come to Apia today. Koa was also told at 8:30 this morning. So Phil is staying over tonight, which is cool. But it’s just funny that there’s no notice.

And I feel bad because my house is filthy. And I had some Skyping on my agenda for the evening. And I have dirty laundry on my kitchen table. I would have, you know, put the dirty laundry away or whatever.

I should also add that the meeting was kind of a waste of time. There was no sound amplification, so we couldn’t hear anything. Also, none of us were any clearer on the new changes to the Pacific Senior Secondary Certificate exam that our year 13s are taking at the end of the school year.

Anyway, I hope you’re also keeping on your toes. Pictures below. 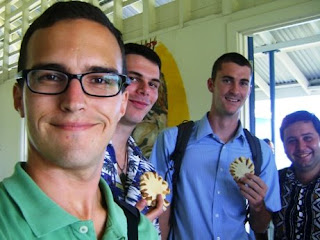 Me, AJ, Phil, and Koa. I was going to post this up top, but I really wanted to say that we look like a really geeky mellow rock band. Maybe even Christian? Maybe we started out as Christian rockers to get big, and then we crossed over into the mainstream? Koa is definitely the drummer. 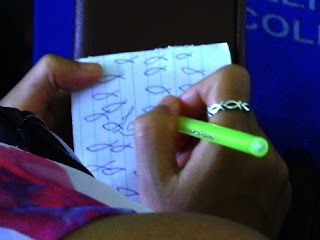 The missionary sitting in front of me... bored to tears. Or Ichthuses. What's the plural of Ichthus?
Posted by Matthew at 8:39 PM

Welcome to the world of education where meetings are called at the last minute to deliver vital info which turns out to be neither vital or timely. Amused that there's no difference! But one lesson to be learned from this... always keep your house clean and laundry in the basket. You just never know who will need to spend the night. Goes along with that old adage of wearing clean underwear in case you are in an accident and have to go to the hospital....