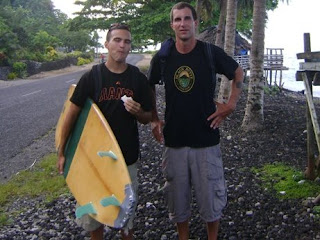 During my first couple days at eCivis, upon hearing that I’d recently turned down the Peace Corps, someone told me, “Oh. I heard it’s just a bunch of lazy kids on vacation for 2 years.” My experience has been quite the opposite, but at the risk of furthering that misconception, there are days here that get into that grey area between assignment and leisure. Today was certainly one of them.

I met up with a bunch of volunteers at Daphne’s, a diner down the street from my school. When I first moved into my place, Phil told me, “You’re right by Daphne’s. They have awesome breakfast food.” People who knew me well back in The States know that I love going out for breakfast on the weekend (Guilty as charged.). There are a bunch of places in San Francisco (Ella’s, Stack’s, Squat and Gobble, et al.) and Los Angeles (Now-closed Doughboy’s, Square One, The Pantry... kind of, et al.) that are popular, awesome breakfast spots. I’d rather go out for breakfast than go out for dinner. If I can get an ice tea and I can overlook ocean, even better.

So living right near Daphne’s was exciting, but also a little dangerous. Frequently going out for breakfast could get expensive. I decided to save going there for a special occasion, and the first Saturday after school started sounded like a good reason to go out for breakfast.

I met up with Blakey, Max, Supy, and Koa. We sat outside where we could see the ocean. I didn’t have ice tea—I was a little rusty on the breakfast routine—instead opting for coffee. And Phil was right. My omelet was delicious. I’m usually weary of ordering something with the word ‘Tropical’ in its name, but the Tropical Omelet (3 eggs, ham, pineapple, mushrooms, cheese) sounded good today.

Max spotted Aaron walking along the sea wall toward the Peace Corps office and called him over. I forget what their business was, but I was supposed to go surfing with Aaron on Thursday, and I opted out on account of general exhaustion. So when Aaron saw me at the table today, he asked if I wanted to go surfing today. “Sure,” said I.

I met up with Aaron at 3:30 p.m. because high tide—apparently the best time to surf—was at 5:00 p.m. today. Since we were carting 2 surfboards, we caught a taxi and headed out not too far from Apia. In the future, assuming I had no surfboard to cart, I might consider riding my bike out there. It turns out that the surfing spot is one of the most scenic places I’ve seen in Samoa.

I have seen a lot of nice beaches, but the surfing spot is right at the bottom of a steep mountain that is covered in green foliage á la Lost. And with the waves crashing and the sun reflecting off the clouds is was really pretty.

Now, I’ll be the first that I enjoy the surfing lifestyle far more than I enjoy the surfing. Mostly I feel okay with this, but I feel like putting up an occasional effort at the latter is attrition for my poseur status with the former. I body surfed often in Los Angeles, mostly because I was too cheap to take lessons let alone purchase a board. Body surfing does rely on the same concepts as surfing, and was definitely a boon to my performance today.

I am definitely a beginner though, and the surfing spot is more of an intermediate/advanced place to surf; if this were skiing, I feel like it would be a single black diamond. It was a rough day, but I enjoyed myself. I caught one wave intentionally, but it threw me before I could stand up. I caught 2 waves unintentionally, and they were painful.

So there are occasional days that feel like vacation. But life here often has a ‘roughing it’ sort of tone, and it’s nice to step out of that every once in a while.

I hope your Saturday was also nice. Pictures below… none of Daphne’s because the camera batteries were still dead this morning. 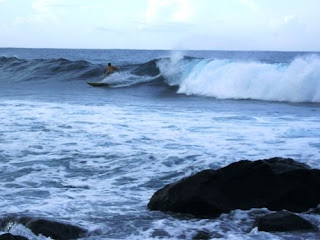 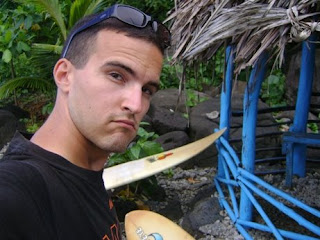 Me. Too cool for school. The usual. 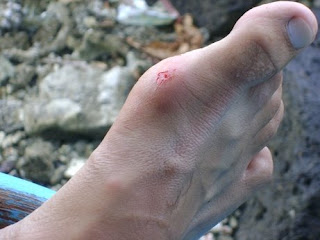 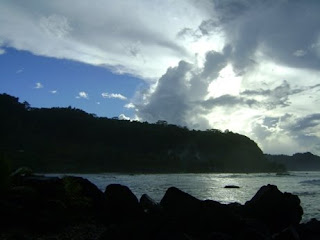 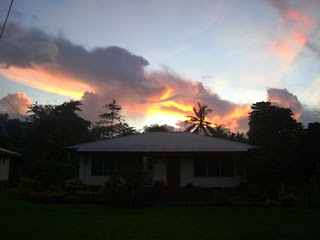 The sunset over my house tonight.

The sunset is beautiful. Your foot, however, is not. Do you have neosporin or something to put on it? Shall I send you some?

What happens if the scratch is from coral?

(not to mention a dog killer)