I haven’t been wearing sunglasses very often. Sunglasses means wearing contacts, unless I want to go around blind, and there’s several reasons I’m not enthusiastic about wearing contacts. My confidence in my bathroom’s sanitation is fairly low, I sweat too much for my body to maintain the moisture it needs for contacts, and there’s a lot of dust in the air in Apia that makes contacts uncomfortable. Given this, I feel like I can see the crows’ feet growing in the corners of my eyes. It could just be mental though.

One sign that it’s mental is people at school keep asking me my age, wondering if I’m actually old enough to be doing what I do here. It tends to be prefaced with some sort of pre-apology; that is, “I don’t mean to be rude, but…” One teacher told me I look 16. Another just laughed to himself (He is large and bald. I asked how old he is. 29.). And then today a student asked me how old I am, and when I told him, he’s goes, “Oh. You’re small.” In some ways I think should enjoy the fact that my youthful glow hasn’t worn off. But living in a culture that equates aging with wisdom and respect, I do feel like some of the staff sees me as a whippersnapper.

This doesn’t seem to have gotten in the way of things too much. It also helps that I have the only working copy machine at the school right now. True, it does force people to be nice to me, which can yield disingenuous interaction, but it at least it means they’re interacting. Actually, on the whole, the staff here has been very welcoming. I am always warmly greeted, and it seems like people are genuinely happy to see me. I just worry about how it looks marching in, taking the only air-conditioned classroom (necessary for the computers to survive), and complaining about things (like how I have no whiteboard and how I’m not sure it will work having 50 students on 10 computers).

Speaking of that, today was the first time I’ve had one of those large classes use the computers. The 11.4 class used Mavis Beacon Teaches Typing today, and even though the lesson was a bit of baptism by fire, it was surprisingly smooth. I think I was bracing for the building to collapse, and it didn’t.

That’s all. Hope things are well. A couple pictures below. 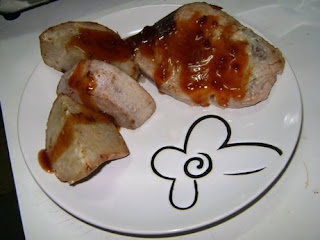 Teri Taro Tuna. It's a dish I'm perfecting. Teriaki over taro and tuna steak. They all look the same color, so it definitely needs so garnish. And maybe some carrots? 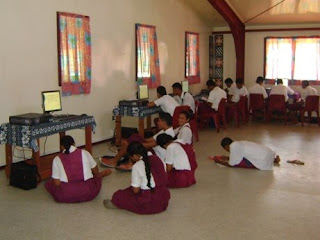 Students crowded on the floor around one computer. This arrangement worked surprisingly well, but right now they're only taking notes on the PowerPoint I'm displaying on the network. This won't work when we start actually using the machines.
Posted by Matthew at 7:52 PM

for the teri taro tuna. could you mash the taro like mashed potatoes? maybe herbs for garnish... and lemon slices/wedges on the side (not a fan of carrots, but whatever floats your boat).

i think the taro looks great! i loved it when i was there visiting cale and sara. there was this little place called morning side cafe or something like that - cale would remember..anyway, they had the best food! yum
i am wondering why i did not meet you when i was there - maybe you arrived as i was leaving...
good luck and i enjoy your postings
annette
cale's mom

I know what you mean about the age thing. Someone recently asked me if I was 16! Guess we'll be happy when we're 60 and look 50 :)