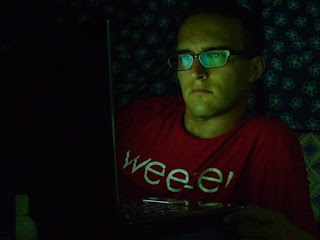 For being cut off from Hollywood, there is still quite a bit of pop culture passed around among Peace Corps here in Samoa. Through DVDs, Divx, and mp3s, I’ve been able to acquire a fair amount of movies, TV shows, and music that I hope will compensate for the lack of TV in my house. And while I’m a little shocked at the sheer amount I’ve been able to stockpile, I still feel like a depression-surviving pack rat, rationing my intake of pop culture to assure that what I have will last.

First, let me say that my jury is still out on getting a TV. While Samoa only has 2 TV channels, it would be nice to have a little bit of that weekly routine that I had in The States. The other thing I really like about TV, and which is actually accented by having only 2 channels, is that it’s fun to be able to watch as a community. I enjoyed going to work or school in The States and being able to talk about whatever was on TV the night before. As much as TV has come to control our lives, I think it’s an important part of culture, and I’m still contemplating buying one here.

That said, my strategy for rationing out the stuff I have is by watching one episode of “Arrested Development” and one episode of “The Wire” per night. I have watched both series in their entirety before, but they have a similar amount of episodes, and it’s been nice to start out with something old and familiar.

The weird thing though is that watching 1 episode per night is a bit unheard of in The States. I feel like most people watch 1 episode per week while a show is still being televised, or the show is released on DVD and people go on a binge watching several episodes a day until they finish a series.

This strange middle ground of watching one episode per day, particularly with shows like “Arrested Development” and “The Wire” that don’t rush to tell the story, means that I remove myself a bit from either show’s story arch. It feels less like a story is being told, and more like things are happening to the characters as they move through their lives. Since it’s one episode a day, you feel like you know the characters better than when you only see them once a week, but they seem more real than when you watch them for 3 or 4 hours in one day.

This is especially true watching from my couch, living in a surreal situation and a pop cultural vacuum. Sticking to 1 hour a day of “The Wire,” it starts to feel nearly as real as the rest of my day; or maybe what I mean to say is that joining the police force in Baltimore seems almost as conceivable as joining the Peace Corps in Samoa. An example of this is at the beginning of season 2 of “The Wire,” it’s winter in Baltimore, and seeing the characters in overcoats and gloves on a regular enough basis made me feel like I was there too, even though I’m living through my first tropical summer.

From a critical perspective, watching one episode a day heightens the senses. The tone and style are constant in my head, but there’s no information overload. I feel like I notice more about the characters and the way the story is told more so than the weekly or binge-style of TV digestion.

I noticed that I really underappreciated Wee-Bey during my first time through “The Wire.” And “Staff Infection” is one of the most underrated episodes of “Arrested Development.”

Finally, it’s a treat to watch either series. They are both extremely re-watchable in the sense that you get so much out of repeat viewing. On both shows, you can catch things that you didn’t notice before but enhance the story that much more.

But I also think the asceticism of pop culture here only serves to enhance what I watch.

I hope you’re enjoying TV and Movies. It’s my first Oscar season away from home, and it’s a little disorienting. Promotional pictures below. 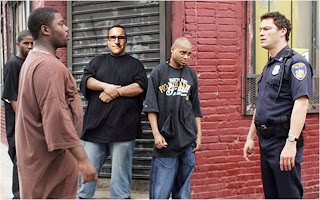 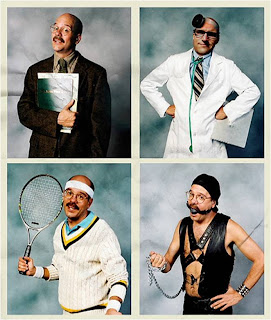 Tobias's headshots from "Arrested Development."
Posted by Matthew at 8:38 PM

i just noticed your superimposed face on the photos. the resulting laugh just made my night.

And if it makes you feel better, I recently gave-up TV for no reason other than I thought it would make me smarter, healthier, more productive (say that in a robot voice). So far no dividends, but i still have hope. I recommend sticking to the rationing (even if you could binge, you just feel emptier afterwards than you did before!) CursEd TV!