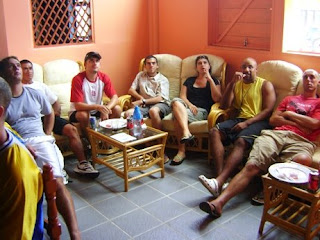 It’s weird the things you realize when you’re abroad. Today I realized that Superbowl Sunday is pretty much the exact same holiday as the 4th of July, except it’s in winter and there’s only fireworks at the stadium. Other than that, it’s the the same day! You get together with all your American friends while for the rest of the world couldn't care less. True, summer weather makes the food served on 4th of July far more likely to be barbecued, but a drumstick cooked in the kitchen is still a drumstick. And, perhaps a bit counterintuitively, the likelihood of guacamole making an appearance on either day is extremely high.

One interesting thing about celebrating such American holidays abroad is they bring out surprisingly levels of patriotism. With a few stark exceptions, Peace Corps Samoa volunteers tend to be bleeding heart liberal hippies. That said, being an insular minority in Samoa, the ties that bind us become much stronger (Sorry for going all poli sci on you with the “insular minority” phrase. We’re a minority because there are more Samoans than Peace Corps in Samoa, and we’re insular because a Samoan cannot easily switch to being an American and vice versa. Normally academia refers to a “discreet insular minority” because you normally can’t tell political affiliation by looking at a person. I’m leaving “discreet” out in this context because as hard as we try, Peace Corps volunteers often stick out like sore thumbs.).

I guess what I’m getting at here is that despite a total disinterest in professional football in The States (Fight on, SC!), I felt emotionally invested in today’s game. I was kind of rooting for the Cardinals, mostly because they were the underdog, but my emotional investment had a lot less to do with a particular team and far more to do with watching football.

Part of the joy (and relief) is simply understanding what’s going on. During training, Samoa played Tonga in the South Pacific Rugby championships. A bunch of us watched the game in a crowded place with many Samoans present. It was a fun, charged atmosphere, and we were able to pick up on many of the rules. But in the end, I still had barely any idea of what was going on.

It’s nice to understand the nuances of the sport you’re watching. How exciting was it to see a 100-yard interception run? How crazy was it that Arizona scored a 2-point safety? It’s these little things that made the superbowl feel comfortable.

We watched on ESPN Australia, so we didn’t get to see any of the commercials, which a lot of us were bummed about. They did show a lot of commercials for the World Baseball Classic, which is coming up in March. I’m really excited about watching baseball. With school starting now, it does actually feel like summer here. But then again, how can it be summer if there’s no baseball?

Moving on to other things…

The party was a good time. At one point I was standing at the kitchen counter and I watched as Aaron clipped a clothespin on the back of another volunteer. The guy noticed and made Aaron take it off. But when Aaron took it off, he simply replaced it with another clothespin. I watched this exchange go down, and I was happy that I was not a geek with clothespins on my back.

But then I checked my back. There were 2 clothespins. Dammit.

It was a fun, subtle game sniping people with clothespins. And it was the kind of deal where everyone had to periodically pat down their own back (which is a difficult and awkward task) to make sure they were not donning clothespins.

Mostly though, it was everything you’d expect a party to be.

School starts tomorrow, and I’m not prepared. I’m unclear on whether I’ll be teaching 4 classes or 6. It depends on whether the other computer teacher shows up. I really REALLY hope he does. But if he does, what is he going to teach? Has he prepared lessons? How could he if he doesn’t know what classes he’s teaching? Dammit. I’m going to have 6 classes tomorrow. Sucks.

Oh well. I hope things are well. Pictures below. 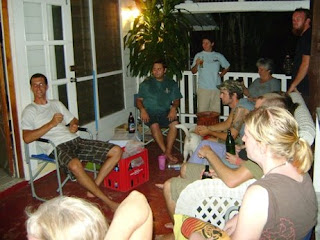 The back patio at Craig and Allison's. 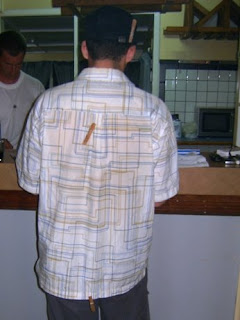 An unfortunate party attendee wearing 3 clothespins. The one on the hat was heroic. 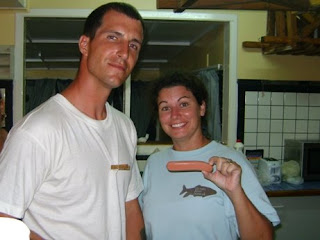 Aaron and Allison. Allison totally reminds me of Jenny from CNET. I hope you're well, Jenny. 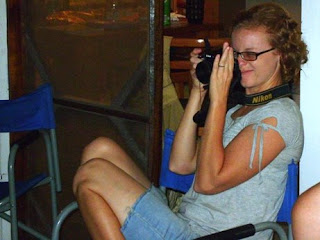 Sara takes a lot of pictures at events like this one. And she's quite the photographer. She has lots of pictures posted on her blog. 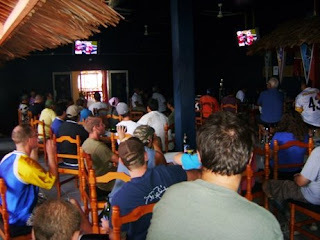 (Seemingly) All of the Americans in Samoa gathered at one sports bar to watch the superbowl. 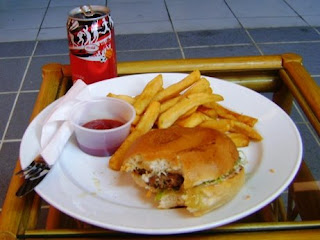 My American meal to celebrate Superbowl Sunday.
Posted by Matthew at 7:03 PM