Note: Yeah. I drew the State of New York backwards. Get over it. 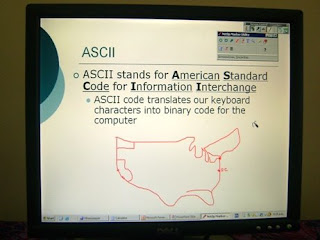 When Bill had knee surgery at USC, a number of other priests stepped in for a week or two at a time while he recovered. Bill hand-picked them in order to make sure his progressive theology was not railroaded by a bunch of conformist hacks. So we got to sit through a string of Los Angeles’s more colorful priests, a few of whom were quite memorable. In any case, we had one that was particularly good, and, growing up in the family I grew up in, I approached him after mass and told him that I really liked his homily. That he was very engaging. And he told me, “You know, at least half of education is entertainment.”

Even at the time, I agreed wholeheartedly. When I taught swimming lessons, I was most effective when the kids were having a good time. I had a difficult time connecting to the 'tweener kids — the 6-9 year olds — and there were never very many classes for older kids, so I ended up teaching a lot of tiny tot classes. And I was good at it. Coming through my class, the criers would be swimming a decent 5 yards of Big Arms. So how did I entertain the 5-year-olds enough that I could teach them to swim? I did it by entertaining myself.

On Saturday Night Live, funny skits become much funnier when the cast begins to crack up. Two examples of this are the Debbie Downer goes to Disneyworld sketch and the original Matt Foley Motivational Speaker skit. David Spade and Christina Applegate have to hide their faces in the couch to keep it together.

My point is, if I can find a way to make myself smile when I’m teaching dry curriculum (like Computer Theory), I choose to go for it every time. So today, after I told my class that ASCII stands for American Standard Code for Information Interchange, I yelled out, “AMERICA! WHOOOOOOOOOOO!” The students laughed and I laughed, and it was good.

I was a bit disheartened when a few of them, confirming why the joke was funny, asked, “Matthew, are you from America?” Yes. Duh. You thought I was a Kiwi?

So they asked, “Where in America are you from?” I get this question a lot, I think out of pure politeness. California is well known around the world, but here I am always met with blank faces.

The question today gave me the opportunity to jump into an American geography lesson. I think I was more bored with ASCII than the students, and playing the ‘Where is…?’ game sounded much more fun.

“Where is New York?”

“Where is Washington?” (When I clarified, he was asking about Washington state, which I found random)

In any case, it brought a flavor of spontaneity to the class, and I think the kids thought it was funny that I thought something was funny. 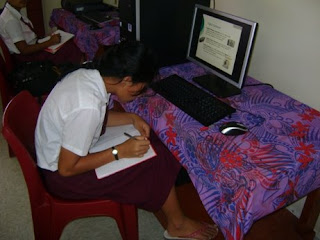 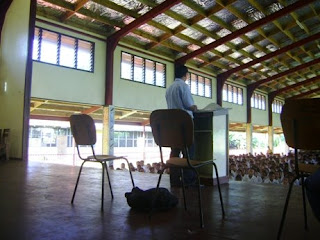 Apong, a missionary and the other rookie non-Samoan speaker on staff, led this week's prayer at the Monday morning assembly. Show off.
Posted by Matthew at 7:03 PM

Try emailing home to ask your family/friends to send you their old National Geographic maps (the inserts?) They might be old, and random (18th Century Germany, North American midwest, Indonesia's deforestation, Minnesota's native american tribes in late 1800's) but they'd decorate your classroom. It helped my kids differentiate between China and Russia, South America and Africa... totally blew their minds. Could be fun!

Also- they likely know Washington State because many have relatives working at the port of Tacoma (random, yes.)

You need to teach them some Oasis songs like... Shampain Tuper Nobie

That Debbie Downer episode in Disneyworld is one of my favorites. I'm not sure I've ever seen so many people in the skit laugh so hard.