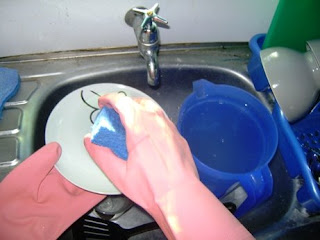 In part, I was afraid of the dishes. My parents used water that could only be described as scalding to wash dishes. I thought it might be one of those things that seemed more extreme when I was younger, but as I got older, the water only seemed to get hotter.

In any case, I left for college with little dishwashing experience and an active distrust of the dishwashing machine. My freshman year roommate was OCD and would wash the dishes incessantly. My sophomore situation was the complete opposite: it was an apartment-wide game of Chicken to see who would crack and wash the dishes first. This game sometimes lasted over a month. It was bad. Junior year sat unremarkably between these extremes. And senior year I met Luisa, who introduced me to washing with rubber gloves.

My mom had only used rubber gloves to wash the dishes after she’d had her nails done. But Luisa used them all the time. It was weird. But right around the same time, a dermatologist suggested that I start using rubber gloves because the strange rash I had on a couple of my fingers might be a reaction to dish soap. So I converted.

I was a little embarrassed the first time I introduced rubber gloves to the 2416 environment. Our water heater was a bit overzealous, and the rubber gloves provided a good shield to the volcanic heat that came out of our faucet, and the boys welcomed the gloves.

Here in Samoa, the dish situation has been different from everything I’ve encountered in the past for 2 big reasons. First, because of my fellow 6-legged co-inhabitants, I’ve had to wash dishes on a daily basis, often doing them as soon as I finish the meal. Second, there is no hot water from the tap, so all dishes are washed in cold water. Additionally, that strange rash on my hand is gone, and rubber gloves are surprisingly difficult to find in Samoa. So I haven’t bothered to use them.

But then last Friday I was trying to get the cap off of a coke bottle because we didn’t have a bottle opener, and one of my tactics split my fingernail. It was just a small split at first, but the crack spread about a quarter-inch toward the cuticle, after which it made a right turn. The whole chunk of fingernail came off. I had been experiencing some strange nail flakiness up to this point, but I interpreted this as a sign that my nails are in a pretty week state.

So I talked to the Peace Corps Medical Officer. At first I thought this problem was dietary. But we talked about it, and it seems like my diet is balanced enough that I should be getting the nutrients my nails need. And then she asked if I did any washing with detergent on a regular basis.

As laundry goes, this was a definite “no,” but dishwashing seemed like it might be wielding it’s ugly head once more. After all, I’m washing dishes daily here; a pace which I’ve rarely, if ever, had to match in the past. And whereas all of my dishwashing in San Francisco has been glovéd, essentially pampering my princess hands, here there was no shield against Dawn and her evil, abrasive ways.

So I found gloves today. And I’m back on the wagon. We’ll see if it helps things.

I brought up this issue with Cale and Sara last night, and Sara snickered at me complaining about my fingernails. It’s not like they’re not buffed to my liking, and I don’t want to take them for a mani… I’m just concerned about their inexplicable weakness of late. So we’ll see.

I hope your fingernails shine like justice. Pictures below. 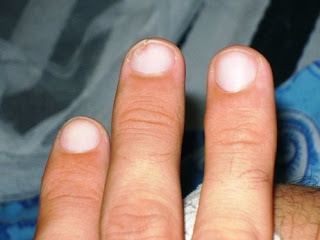 This is my finger last Friday before the chunk of nail fell off.

Blakey and I had breakfast this morning. 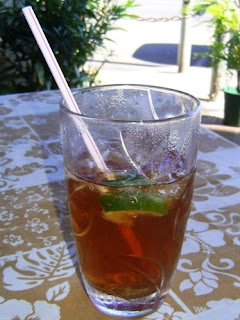 I remembered to order iced tea, and it was awesome. EXCEPT... for one thing. Can you tell me what's wrong here?

definitely...lime, not lemon. just like at baja fresh. so sad. but maybe that's not what you meant. miss you lots!

that picture with the dish gloves kinda freaked me out! first i looked at it and thought, "whoa, matt's tan is really weird these days." but once i realized they were gloves, i thought "how did he take the picture if both hands are in gloves and in the picture?" took me a while to notice that the left hand is flat, and perhaps the right hand glove is also empty and only molded to look as if it is holding the sponge.

anyway, i feel you on the sensitive hands. maybe we should both go for a manicure when you get back. :) hope you're well otherwise!