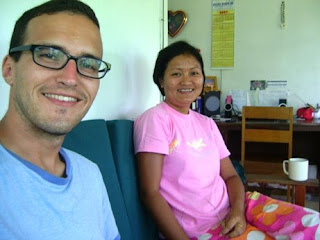 First the Academy Awards… In high school AP Psychology, Mr. Friedman used to talk about a study where chimps filled out multiple choice tests, and guessing at random, their average score was approximately 25%. So my score (9/24 = 37.5%) beat the chimp. So there. And Sean Penn won! Wowa. And he and screenwriter Dustin Lance Black were quite vocal in their support of gay rights. How exciting! Don’t get me wrong, I still can’t stand Sean Penn, but I’m pretty happy with tonight’s results. And shocked. Maegi and I both gasped when they announced his name. “REALLY?!”

How lame was that telecast? Hugh Jackman. Boo. The opening musical number and the tribute to musicals were both painful. The one musical highlight (which was actually the highlight of the entire 3.5 hours) was John Legend and A.R. Rahman and whoever that girl was mixing the 3 Oscar-nominated songs. That was awesome.

I also liked the way they edited older movies into the Best Picture clips. I can see how other people wouldn’t like that so much. Am I the only one who did?

The worst part of the show was the In Memoriam. Why were we watching weird panning views of smaller monitors paying their respects? Watching a TV on TV is redundant and stupid and difficult to read. Hella lame.

My travel blog just morphed into a mediocre amateur entertainment blog, and I apologize.

Anyway, I wanted to do a little follow-up to yesterday’s post about the village. I took the pasi mulimuli on Friday. It’s the last bus of the day, so anyone who doesn’t get in is pretty much stranded in Apia, save for hitchhiking or paying an insane cab fare. So if you don’t make it on, you’re SOL. The nice thing though is that bus drivers are incredibly sympathetic, and most of them are willing to stop and pick up anyone who needs to get on.

This is awesome if you’re late getting to the bus and you miraculously catch it. This is not awesome for those who would like to get home in a timely manner (I was in no rush… but still the bus can take forever.). Also, physics tells us that there is a finite amount of space within the confines of the walls and roof of the bus. That said, the policy here is to fill as much of that space as possible.

This includes, but is not limited to:
I tend to be smaller than the average Samoan (believe it or not), and thus I am an eternal lap-sitter. This is certainly as awkward as it sounds, and my ass has made a bit of return to the boniness of my youth. So… sucks to be that guy. That ride was nearly 2 hours.

As far as the actual village goes, the baby definitely recognizes me now. And she walks! It’s insane the progress she’s made after a month. And Akanese has started kindergarten and there was a palpable change in her behavior.

Leaving the village yesterday morning was difficult logistically. I wanted to hang out as long as possible, but I did not want to get stranded in the village; I didn’t bring clothes for church, and taking a 5:00 a.m. bus on Monday morning in order to get to school on time would be lousy. I asked a bunch of people when the last bus would leave, and I got a different answer each time. So my plan was to catch the 10:00 a.m. bus to be on the safe side, but my family assured me that there’d be another. Finally, Asolima called the bus driver to confirm that he’d be making a trip to Apia in the afternoon. Calling a Muni driver in San Francisco would be bizarre, but here, it’s pretty normal, I think.

That’s all I got for now. Hope your weekend was nice. Pictures below. 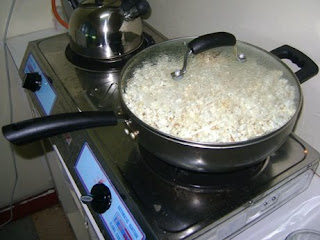 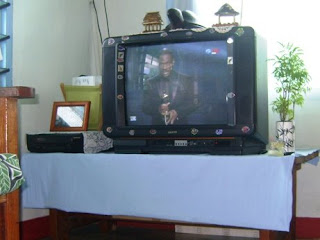 The TV at Maegi's house. I just got that Eddie Murphy was the new Nutty Professor. Duh.

This is my huge cool bus panorama. Click on it to see it big. It took forever to get it together... so click on it. Do it. 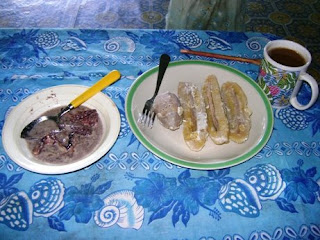 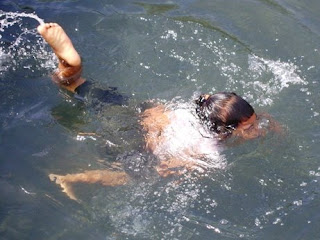 Akanese swimming in the public bathing pool. I felt kinda like the uncle who comes to swimming lessons and takes picturs. She'd still be a tiny tot, I think. Maybe a Level 1. 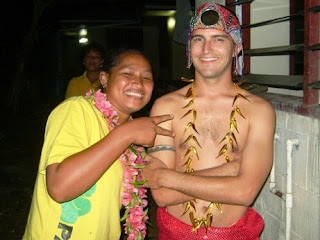 One last Taupo pic. This is me with Tone... She's good friends with Phil's sisters.

Your cultural exploration pieces are my favorite. So I really enjoyed the photo of what it is like on the bus. I could not have imagined how crowded it is.

So, I totally agree with most of your oscar comments, except perhaps the musical stuff... I thought the opening was just as amusing as the comedians ever are... and the 'tribute to musicals' or whatever it was was fine, apart from the fact that I don't think "High School Musical 3" and "Mama Mia" can fairly be said to indicate a mass return of musicals. So it was pointless. But whatever, dance around a bit. And Sean Penn was awesome (and I even picked him! occasionally not paying attention and just going with what you'd like to happen works out). The in memoriam bit disappointed me too. That's always one of my favorite parts. And I'm totally with you on the best picture thing (and so was the whole group I watched them with- so you can't be that much of an outlier). What was your take on the way they presented the acting awards?

i was pretty happy with the oscar results myself. having only seen Slumdog, my next project is to see Milk.