Over/Out of my head 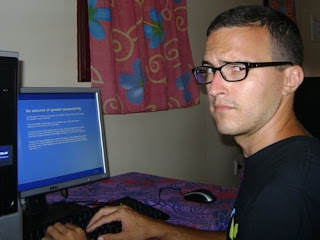 There’s a scene in the 1990s version of Father of the Bride in which, as Steve Martin’s adult daughter tells him she’s getting married, he imagines her as a 4-year-old saying, “Daddy, I met a man in Rome. He wonderful and brilliant, and we’re getting married.” I am reminded of that scene sitting here in front of Microsoft Server 2003.

Max and Supy helped me install the server software on to one computer in my lab, and then network the rest to this one. We configured one computer to the settings we wanted, and then we ghosted that one out to the rest. This worked well, except the ghosting did not work for the 3 non-Dell computers. So they are currently not identical to the other computers in the lab.

Max, who knows what he’s doing, was able to configure them all so that they open to the Student account login on startup, but now that I’ve figured out the non-Dells, they are not automatically starting up.

Finally, ghosting the one on all the others made the backgrounds change from the custom Maluafou desktop to the generic Windows hill and sky. Max told me that I could setup their desktops remotely via the server, but I can’t figure out how to do that.

I admit, none of these are huge issues. If I manually log into the Student account on the non-Dells and the students are able to ignore the desktop background, class should be able to function as normal tomorrow.

And it makes good sense that the computers should be running on a server. With the current setup, they can save things to a shared folder and I can collect assignments through my computer rather than going machine-by-machine with a flash drive. I can control their logon and their permissions. I can forbid students from printing, but allow teachers to print. In theory.

But… I can do these things if I know how to do them, and currently, I don’t. Hell, I’ve been looking at the administrative tools for an hour, and I’ve made no progress.

Sounds like a great problem for late Sunday night, huh? It makes my vacation Saturday yesterday seem a little irresponsible.

Up until now, today has been pretty chill too. I took a nap this afternoon, and had strange dreams. In fact, since arriving in Samoa, I’ve had lots of strange dreams. Perhaps it’s being immersed into a completely new environment, or perhaps it’s the stress of being away from everything that is familiar. When I first arrived, I had dreams that my late grandpa was taking Hindi lessons, and that we had to pick him up after class. We got a verbal progress report from his teacher while he climbed into the van. It was bizarre.

Anyway, I have 3 strategies for figuring out this server ish. They are:
I’ve put the cinderblock shelves on the docket for afterschool tomorrow, but I don’t know how realistic that is. It will probably have to wait until later in the week.

Update! Max called and helped me. So that feels a little better. More work to do. We'll see how things go tomorrow. 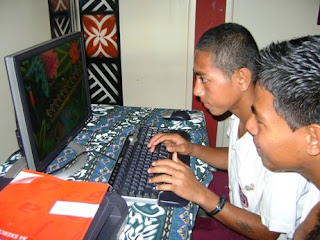 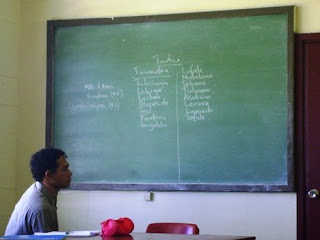 The list of candidates for student government that we elected.
Posted by Matthew at 7:20 PM

You commented that you hoped your readers were not in over their head...I daresay several of us parental types would definely be over our heads trying to network computers. I personally would be in the bottom of the Pacific under a rock.