The Economics of Crave 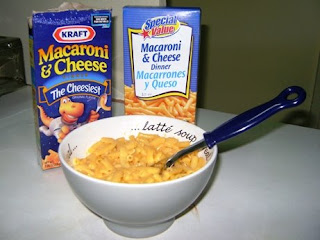 If there’s one thing I learned in Oakland, it’s that teaching by the seat of your pants is something sixth graders will see right through. They spot it quickly, and they punish the teacher that tries it. Lucky for me, it seems like Samoan high schoolers are a little more forgiving. Not that I’ve been slacking off in preparing for class, it’s just… I have to be patient with the network, and the students do too. In any case, though the day started out a little precariously, the classes went surprisingly smooth, and I’ve been able to focus on more important things this evening. Namely, finding macaroni and cheese.

I’ve witnessed a lot of other volunteers in the midst of the macaroni and cheese bug, but I’ve never found it something to crave. Don’t get me wrong, I love Kraft Cheese and Macaroni from the box, and I’d even go so far as to say I make it above-averagely well. And particularly during my swimming days, I could put down an entire pot of the stuff in one sitting without blinking an eye. But it’s not something I tend to yearn for.

So what changed? I think my hunger for macaroni and cheese right now is more out of nostalgia and curiosity than actual craving. I would pay good money for a big thick burrito from El Burrito Express right now. I’d pay $40 WST… so roughly $13 USD (I feel like I quoted a higher price last time. My lower price this time should not be read as a signal that I want a burrito less, but rather that my perception of money has changed because of exchange rates and income.). The burrito thing is all about craving. I don’t feel like I need it the same way.

Case in point: Three stores into my mac & cheese hunt, I found it at Citimart (No affiliation to Citi or Citibank… wouldn’t THAT be strange?). It was $5 WST for the Kraft Cheese & Macaroni, and $3 WST for the Macarrones y Queso Mexican offbrand. This difference in price gave me pause. $5 seems like a lot to spend on one dinner given that an entire loaf of bread costs half the price. On the other hand, I’ve had offbrand macaroni and cheese before, which has yielded mixed results.

I suppose there would be the same conundrum with the burrito, but the prices would have to be much higher. As I said, I’m willing to put down $40 on a burrito right now, but $5 for mac and cheese seems steep. I guess the equivalent burrito situation would be paying $50 for an El Burrito Express burrito verses $15 for a Taco Bell burrito. Am I willing to go slightly higher for what I know is good, or should I abandon my quality standards and go for what is more affordable?

The Kraft box had a promotion on it that involved punching in your code online to perhaps win a trip to Space Camp. Upon reading the fine print, I saw that the contest ended in May 2008. That made me curious about the expiration date (Does Macaroni and Cheese have an expiration date?). Yes. It does. And this box was January 29, 2009. The expiration date on the Macarrones y Queso is March 7, 2009.

So I split the difference and bought a box of each.

I hope the lame economy isn’t forcing you to lower your quality standards too far. Dog food is not option. A couple pictures below! 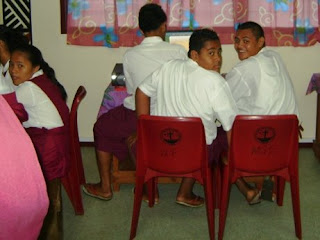 This happened 2 classes in a row today on the same computer. Dude on another dude's lap for an extended period of time. And everyone's cool with it. Ain't no thang. 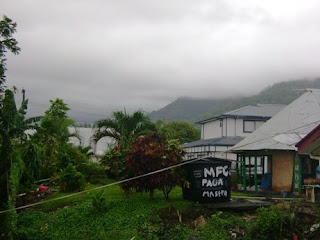 It's fun to look around and realize that I'm on an island in the south Pacific. This is the view of the mountain from right outside my classroom door. Today was bad weather, and it still looks cool. 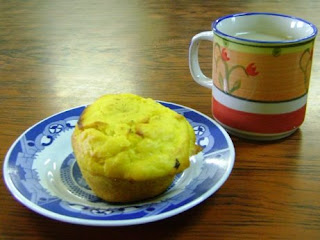 During Interval, teachers are served tea and a small snack. Often it's muffins. I like Interval a lot.

Dude, I bet the mac & cheeses are both made by the same company. That stuff might have a date but the shelf life is endless. If the cockroaches eat it, then it's okay. If not, well....
Stick to the taro and seaweed.

Shelf life in Samoa is a whole different matter. The packaged mac and cheese type products look good on the outside, but occasionally have little bugs in it. I'm not sure what kind. Weevils? So it's either extra protein (for free!) or nasty, depending on your perspective. And also, the noodles somehow rot more quickly in the humidity. :(

Hiya,
Can you take more landscape shots of what your life looks like? The picture looking out from your classroom was WAY better than I was imagining it to be... maybe it's just a lack of imagination on my part, but apparently I have no idea what you see outside every day! Thank you :)