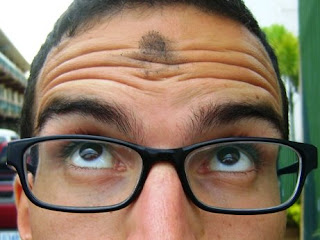 I realize I’ve been a little heavy on the Jesus front lately, what with the Ichthuses on Monday and starting out with Bill’s stand-ins yesterday, but I’ve painted myself into a corner with today being Ash Wednesday. So don your purple, get ready for Clam Chowder Fridays, and whatever you do, don’t scratch your forehead.

I almost forgot too. I had to stay after school because students come and hang out in the computer lab on Wednesdays, and the entire time I was looking forward to a lazy afternoon spent lounging in boxers in front of the fan. I’m not really sure what jogged my memory, but I got back to my house around 4:30 p.m., and mass was at 5:30 p.m.

Now Ash Wednesday is no Easter or Christmas, but it packs the pews, and I was already looking at a 20-minute walk to the church. And hell if I was gonna stand around in the back. So in order to get there early and ensure my seat, I barely had enough time to walk in and walk out of my house.

On Sunday I go to the 9:15 English mass, which is nice because it’s in, you know, English. But when they announced the mass times for today, they didn’t clarify which services would be held in Samoan and which would be in, you know, English. So I dawdled a little walking in, trying to figure out what language we’d be speaking tonight. And that was when I heard my new Samoan name called.

I looked up to see one of my year-12 students sitting in the back row. The look on her face was one of shock. I smiled and said hello and sat down next to her, doing a mini-genuflect and the sign of the cross as quickly as possible. “So you’re Catholic?” She asked, still baffled.

I could understand her state of mind for 2 reasons. First, it’s weird teaching at (and attending, I assume) a school run by a religious organization that you are not a part of. And it’s difficult to try and pick out who the other Congregationalist-poseurs are. Second, it’s weird to think that teachers are actual humans when school is not in session. It didn’t seem unlikely that some of my teachers either lived in their classroom or faded away to nothingness when students left for the day. So I was hitting this girl with a double-whammy.

She was only sitting in the back row because she was waiting for the rest of her family to arrive, and she soon got up to go sit with them, leaving me in the back row. I had come early to get a seat, but now I had to flaunt my seat in front of all the people standing in the back. Oh well.

Songs were in English. The sign of the cross was almost always in English. The readings were in English. Most other stuff was in Samoan. No holding hands during the Our Father. No Sign of Peace. And the quick English translation at the end of the homily was just a reminder that everyone (EVERYONE) should be avoiding meat on Fridays. Children younger than 6, and elderly who are older than 60 – ehhh… 65 – shouldn’t worry about fasting.

So mass was spiritually hollow, but I did run into that same student on my way out afterwards, and she was happy to see me again. So I think it was worth going.

On my walk home, one of the bouncers outside the dance club near the church yelled, “Sole!”, which means “Dude!”, and then gestured that I had something on my face. But I didn’t wipe.

Hope you’re keeping your hands off too. I am promising you a Jesus-free Thursday! Picture below. 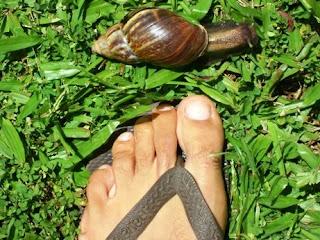 Saw this snail crawling across the lawn in broad daylight right after school today. It was huge. Didn't have the heart to steal it's shell.
Posted by Matthew at 8:21 PM

wow...seki a lau blog sole.
just came across your entertaining blog and makes me miss home like crazy..i like it!
manuia le aso sole.,

So the snail? It's an invasive species. African soemthing snail. Leata (during our training) would jump on them to squish them. Gross, yes. But no worries about stealing their shells!!

yeah they are bad and u can find tons underneath gigantic tamu leaves and that is not good considering how long it takes to grow and that its a staple food!

yuck, african snails are a pest and we ...wait for this..used to pour salt on em' and watch em'die!!
i know...pretty sick stuff heheh

Are they edible? A little olive oil, garlic and parsley.... thinly sliced and spread on toasted sweet french bread. Add capers with the pickling juice and lemon zest, if you have them. Chase it down with a Sierra Nevada beer. Perhaps you can establish a market for samoan escargot, and even farm and export them.

It's shell? How about its shell?

I went to mass by myself on Wednesday and thought of you! I was like, "if Matt was here, he'd go with me." Needless to say, I found another reason to wish you were still here. No meat Fridays once again. Happy Lent!

They are most definitely not edible. Teuila used to warn me they carried meningitis... Could be a Teuila thing, but I didn't want to test it.

You can kill all of them. It's one of those many species brought from the outsides, like snakes, dogs, mice, cats etc....snakes, I hate them