Peace Corps had a Half Day 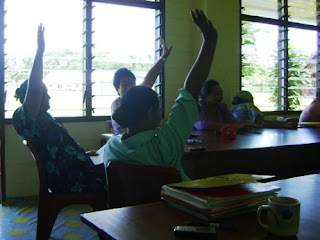 I’ve heard from many volunteers that school days in Samoa can change on a dime. On the second day of our volunteer visit, Cale’s school decided that it was “Cut the Grass” day, so classes were canceled and students went out to cut the grass with machetes. Other times, classes might be canceled for certain sporting events. And today, less than a week into regular classes, my school canceled classes for the afternoon.

Just like I’d been warned, the afternoon was canceled without any warning. In fact, I was never told. After Interval (the break in the middle of the day), I left the teacher’s lounge to get ready for my next class. On my way, I had to weave my way through hoards of students headed toward the Great Hall, on top of which my classroom sits. And then they started singing, and I realized something was amiss.

So I headed back to the teacher’s lounge, where a staff meeting had apparently begun. This staff meeting was one of the more bizarre experiences I’ve had since I arrived at my permanent site.

The meeting was conducted entirely in Samoan, which is nothing new. For the first 45 minutes, discussion went on like normal between the principal, the vice principal, and several of the teachers. Then one got up and started writing on the chalkboard.

We were coming up with a list of names. Initially my guess was this was a list of donors, or parents, maybe? But as the names kept coming, I started recognizing student names. While I’ve only committed one student name to memory (the sole student in my year 13 class), I did go through the same name-sharing ice breaker with 12 classes this week... so they did start to sound familiar.

Though I’ve been here for almost 4 months, I admit I have not been able to decode whether particular Samoan names are for boys or girls. So I was still unclear on what these lists were that we were creating. I half-seriously, half-jokingly started to think we were choosing a homecoming court.

And then we actually voted. For students.

We’d narrowed the list to 2. The first name got 10 votes. Hands went up for the second name. I looked over at the missionaries who both had their hands up. And then the vice principal called out in English, “Matt. We need you to vote!” And the principal barked at me with feigned urgency, “Yes. Matt, you must vote!” So I put my hand up.

The entire room found this hilarious.

And then my vote was tallied along with the rest. 9 votes for my candidate. We lost by 1. Damn.

New candidates names were written on the board. We started voting again. I pulled out my camera. Sometimes I figure, cultural differences aside, situations here become so absurd, that I feel justified in making awkward social gestures — like photographing teachers voting for a nebulous election. I voted and took the picture at the same time. The room erupted in laughter again.

And then the meeting was over.

One of the missionaries, my next-door neighbor Maegi, handed me a sheet of paper to type up and print out in the computer lab. Indeed, it was the list of names from the meeting. We had just elected the student government. We had appointed a leadership council, and we voted in a boy’s president and a girl’s president.

And classes were canceled for the rest of the day. Cool by me.

Max and Supy are here again helping with my computer lab. And that’s all I got.

Hope things are well with you. Apologies that there are no pictures below. The rechargeable batteries in my digital camera died as I was transferring the images. I only got the one above. But you'll see today's pics tomorrow. Cool? Have a great weekend.
Posted by Matthew at 8:27 PM

Matt, You have inspired me to blog. I made one for us states-side PC supporters some time ago but never told anyone. Would you be interested in adding it to your list of blogs? Here's the link: http://familiesfriendsofpcsamoa.blogspot.com/