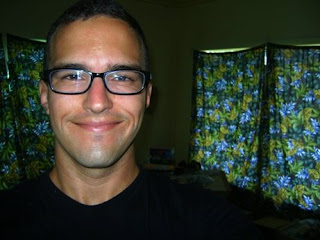 Happy Valentine’s Day, everybody. So hopefully this picture looks familiar because it is meant to recall a similar pose from just over a month ago. That’s right. I got my stuff back. Pretty much all of it! Including all of the photos that I had lost on my digital camera. All of the photos have been recovered in addition to quite a few pictures taken by the person who stole the camera.

Though I had always planned to visit Phil this weekend, he called me Wednesday and let me know that the Police had come and dropped off my iPod and my headphones. This news was very exciting, but I really wanted to get the digital camera and the pictures it had. In addition to all the pictures from my Peace Corps experience, it also had pictures that I had taken of my host family that they wanted to get blown up. So it was very when I arrived at Phil’s yesterday, and the Police had returned to drop off the digital camera with all of the pictures still on it.

The fact that everything came back in perfect working condition is really exciting. REALLY exciting. I once again apologize for second guessing the abilities of the police in this situation. This would have never happened in The States. I’m impressed. I do have a couple details regarding the crime, but I think I’ll explore some of those issues in tomorrow’s post.

Anyway, it was a good time hanging out with Phil. Shortly after I arrived at his house, I sat down in one of the chairs at the kitchen table, and he sat down in another. And for the next 5 hours, we just sat there and chatted. We compared notes about teachers and students and teaching in Samoan, gossiped about other volunteers, talked about how we’ve been affected by our respective solitudes.

For that last point, it’s telling that we can talk about it now. When I was at Phil’s a month ago, it was right after training had ended, and all of group 81 seemed to be trying to find ways to cope with the loneliness. Back then, it was still difficult to articulate the way we were feeling. Particularly when we’d just gotten out of training during which we’d been with a group of people every waking hour. But this time around, we were able to talk about it.

Phil, admitting that he was probably getting the words wrong, felt that we are all “going a little crazy. Not in a way where we’re going to kill people or anything like that. I just think our brains have to adjust to being alone so much.”

For me, it reminds me a bit of living in Pasadena when I got out of college. Maybe it was a little easier back then because I had cable TV, but my current situation does feel similar. Back then, I’d get home and sit in my tiny apartment and lay around passing the time.

In any case, I think it is progress that we went from finding the loneliness so overwhelming that we couldn’t talk about it to finding it manageable enough that we can talk frankly about how we’ve all gone a bit crazy. I think in a month or 2, it will be life as usual—not even worth mentioning in conversation. Who knows?

Radio promo I just heard (yes… on Samoan radio): Voice Sounding like Barack Obama: “Hello. This is Barack Obama encouraging you to do something nice for your loved on one Valentine’s Day. And for the members of my cabinet, the chocolate and flowers are not tax deductable. Just go ahead and pay what you owe already.” Ugh.

I hope your Valentine’s Day was pleasant. Pictures from Savai’I below. 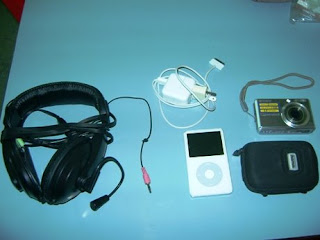 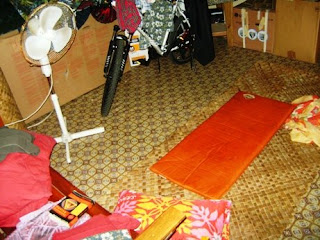 I slept on Phil's floor last night. At one point during the night, I could have sworn I experienced a mild electric shock. Do you think there's any way that the fan could have generated enough static electricity to make this happen? 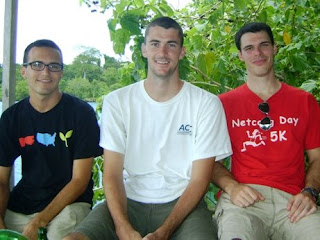 Me, Phil, and AJ at Lusia's for lunch. 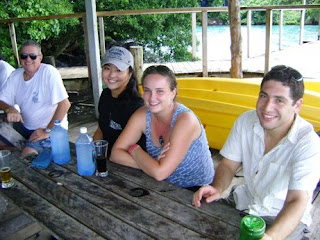 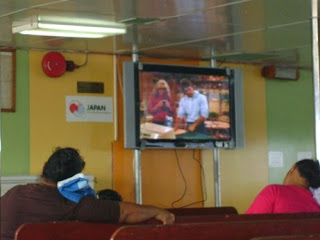 On the ferry back to Upolu, they have a huge flat screen TV. The only such flat screen I've seen in Samoa. And this afternoon, they were using it to play "Who's the Boss?" reruns. Samanth-uh! Angel-uh! Mon-uh! 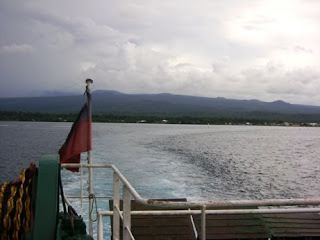 Savai'i, as seen from the back of the ferry. Flag of Samoa waving... kind of.

That is so cool that you got your stuff back, all whole and in one piece!
About the lonliness, Sara has several times commented how lucky she feels to be a unit with Cale, so she is not alone.
All of you are really special people to not just go off to a strange place on your own, but actually accomplish something good, without the usual support system. Way to go PVCs!