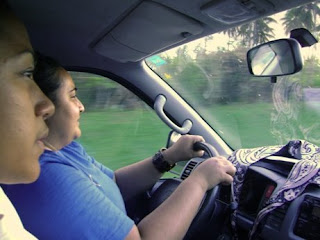 My goal for this weekend was to sleep and to unwind so that the upcoming week would be less stressful than the week that just ended. By this afternoon, I had succeeded with the sleep, but the unwinding handed happened, and I was starting to get nervous. The biggest problem with the unwinding was I wasn’t entirely clear on why I was feeling wound up. And my schedule for the evening wasn’t promising.

One of the teachers I work with invited a bunch of us to go out. A new basilica was being built on the west side of the island, and we were going to check it out. I accepted the invitation out of politeness and boredom. But my hopes weren’t high for the unwinding.

So we got in the car and we were driving along and, out of nowhere, I was unwound. All it took was getting the hell out of Apia. See, on Friday, I even titled my blog, “Gotta Get Out of This Place,” and I had meant that I really needed to get away from my school compound. But I think the problem was I needed to get farther than that. I needed to get out of Apia.

When I think about it, this makes lots of sense. I didn’t have a car my freshman year of college, and Los Angeles isn’t exactly known for its public transportation system, so I spent most of that year cooped up within the confines of 6 or 9 city blocks. And it drove me crazy. I don’t need to go far distances (although I often would when I did have a car) or spend lots of money at the places I go, but I think change of scenery is very important to my mental well-being.

The funny thing is that I totally got this out of my system last weekend and the week before by going to the village and to Savai’i respectively. The problem with each of those trips was I got relatively little sleep at either place. But they both made sense because they got me out of here.

When I worked at eCivis, it was a similar situation. I worked 3 blocks from work. In fact, to get to the good part of Pasadena, I had to walk past my office. And it really did play games with my mind to think that I could never escape work. Even when I had a day off, I was never really gone. But I was able to deal with it because I would drive down to LA or go see a movie in Hollywood or drive out to the beach. And it wasn’t the stuff I was doing that I found relaxing as much as the sheer act of going there.

The situation here brings Pasadena to a new level. I don’t live 3 blocks from work; I live at work. To take my garbage out, I have to walk to school, and that’s a little scary. And even going into town feels like old hat after a while. A bunch of us went out for a few drinks on Friday night, but I walk past that bar almost every day.

So it made sense that it would feel good to get out of town, if only for an hour or two. Before the surprise plans, I was thinking about biking out along the north side of the island to the spot I went surfing with Aaron. I wonder if that would have felt as good as getting in a car. Yes, Critical Mass, I understand that biking always feels better than getting in a car, but sometimes I just want the implicit distance that comes with automobile travel. I’m not sure that getting on a bike has the same mental effect. Sounds like a question to be answered next weekend.

I hope you are fresh and ready for the new week. Looks like somebody’s got a case of the Mondays! Pictures below. 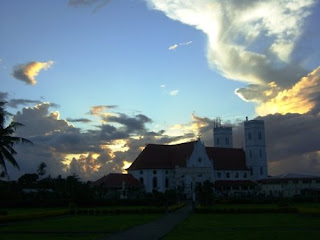 Sunsets are awe-inspiring in Samoa. Never seen anything in California that compares. 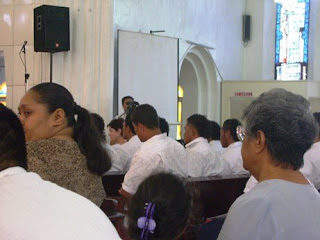 This morning at church, the first four rows of pews on the right side were filled with men wearing the same outfits. It turned out to be the Toa Samoa, or the national rugby team. Also, if you look closely at the picture above, you can see a man with a video camera. Today's mass was televised this afternoon. With the Toa Samoa taking center stage... errr... altar.
Posted by Matthew at 10:55 PM

I loved the picture with the face in the clouds. Very intriguing. I also really enjoyed your "I gotta get out of here" thoughts. It's great reading your posts. Thanks for sharing.

I love reading your blog... I'm Samoan, living in NZ. I was in Samoa for Christmas. Thanks for sharing this... especially the photo of the church at the top, thats my village church (leulumoega)catholic church... All the best and keep up the good work.

Thats the Basilica of St Anne, Leulumoega Tuai many memeories, I am a Kiwi-born Samoan

Thank you for sharing your blog.. it was the best read I had, so honest and how you dealt with such circumstances, especially an outsider comming in, Thank you for all your hard work in Samoa and the effort despite any discomforts; However I salute you for such committment and willing to learn and also share with the samoans. I have the utmost respect for you sir.. alofa atu from Seattle, Wa. "Tiare"

Be careful riding that bike there, there are no bike lanes, and the cars can get crazy.