The Sexiness of Solitude 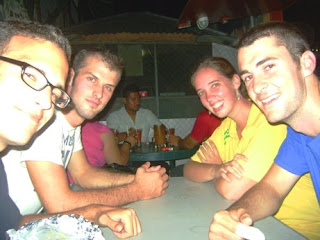 One thing that sets Peace Corps Samoa apart from many other posts around the world is the ease with which volunteers can assemble. Samoa’s geographic smallness means that there are not hours and hours of car travel necessary to get from a volunteer’s site to somewhere else on either island. Most other posts within the south Pacific are scattered over archipelagos with volunteers on many different islands. Coordinating events with large volunteer attendance is quite a struggle in these places, but with only 2 islands and relatively straightforward land and sea travel, a lot of volunteers can congregate pretty easily.

Blakey (81) sent me (81) a text message yesterday morning asking if I’d be down to get pizza later in the day, and I was down, as was Phil (81) who was staying at my place for the weekend. Jordan (81) joined us. And when we arrived at Italiano Pizza on Beach Road, a shocking number of volunteers were already there. Jim (80), Briony (80), Erik (79), Ryan (79), and Spencer (80) were hanging out with a bunch of American med students who are spending 3 months in the country. Later in the evening, Hannah (78), Erin (78), Rosie (79), and Christian (81) showed up at the same place. And just like that, about a third of Peace Corps Samoa had accumulated without any coordination on a random Saturday night.

Mostly, this proximity is a blessing. After a week of being alone at a site, working as a stranger in a strange land, it’s nice to be able to meet up with people who are experiencing similar trials and tribulations.

But after Phil and I got back to my place last night, the subject of our conversation was quite a contrast to the crowd at the bar that evening. And that was that deep down, the seclusion and solitude of the Peace Corps lifestyle was a draw. As Phil put it, “It’s kind of like I applied to be lonely.”

It’s a hard thing to describe, and I think I’ve made it sound more dramatic than I intended. Lorena and I talked about this same thing when I was working on my application for the Peace Corps. She pointed out that she knew part of the allure for me was the clarity that comes with being all alone in the middle of a foreign place.

And it’s not just the constant flow of volunteers through Apia that contrasts with this idea. I think there’s a conundrum in my mind over how much clarity it really wants. The survivalist part of my brain sees the loneliness that comes with that clarity as a threat, and so I set out to clutter my life with things to prevent those feelings of loneliness: Skype, podcasts, Saturday nights with other volunteers. But there’s a more romantic side of my brain that sees the sexiness of solitude rather than the threat of loneliness. This is the side that gains quiet satisfaction from the meditational aspects of sweeping, the whir of the tires on a solitary bike ride, the crickets chirping through the silence of a cool Sunday evening.

I’ve felt torn between extroversion and introversion for all my life, and in joining the Peace Corps and coming to Samoa, I’ve raised the stakes on either side. I don’t think the two are any more at conflict than before, but the rewards are better for both. It was great spending the weekend with people, but now I’m relishing my quiet Sunday evening by myself.

I hope you’re enjoying your own conundrums. Pictures below. 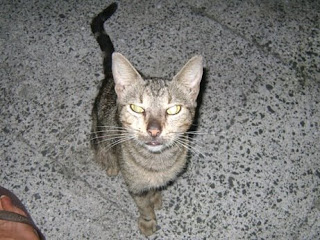 I finished my garlic bread last night and looked down and this cat was cuttin' me with his eyes. It kinda freaked me out. I did stay like this long enough for me to get my camera out. It was serious. 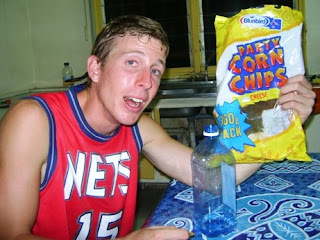 Jim showing off the Party Corn Chips. We deconstructed the salsa and guacamole recipes on the back of the bag, each of which specifically called for Tobasco sauce, which we found strange.
Posted by Matthew at 9:12 PM