The Lighter Side Of… Besides the cheap commuting costs and the environ- mental benefits, I took little advantage of the fact that I lived 3 blocks from the eCivis office. I think during the year that I worked there, I ate lunch at home twice. Part of that was we had a little support group at lunch time where we would commiserate and dream collectively about going to a better place. I also lived on the 3rd floor of my apartment building, which didn’t have an elevator. So going home for lunch was more of a hassle than anything, and once I was there, it was difficult to convince myself to go back to work.

Here the hassles are fewer and the benefits greater. First of all, 4 out of 5 days a week, I have my 2 prep periods back-to-back, so that’s a 100-minute window of time. Second, with the exception of 6th period Tuesday, there are always classes in the computer lab during my break, so I’m being displaced anyway. So why not go home?

And there are so many possibilities when you have an hour and a half to kill in the middle of the day. I think I’d like to eventually fall into a routine with this window of time, but so far I’ve explored many different possibilities.

On Mondays, Wednesday s, and Friday s I either have one class in the morning or no class in the morning (although I do have to open the computer lab for the other teacher), so I’ve explored rolling out of bed, showing up to unlock the door, and then coming back home to shower. The water pressure comes in so much better when all of the other teachers on the compound are in the classroom and I’ve got the entire water supply to myself.

I’ve also used these mornings to explore napping. I’ve never been a very good napper,but there is something pleasant about turning on the fan and the iTunes and lounging with my eyes closed even if actual sleep doesn’t occur.

Tuesdays I’m off the last two periods of the day. Last week I took full liberties with this and left campus around noon. This didn’t work very well, and there were some issues with the computer lab that day that I wasn’t around to deal with. So I don’t think I’ll try that again. Today I came home and graded papers for a while. Not as thrilling, but certainly more productive. And I get to listen to music. My music. Home with my thoughts escaping, home where my music’s playing. But I do think my eventual routine will probably include using my prep periods to do actual prep work.

I don’t really feel bad or antisocial for not spending this time in the teacher’s lounge because the teachers congregate in the teacher’s lounge for tea every day. I see everyone every day regardless of how I spend my prep period, so it’s cool. I’ve also seen the missionary who lives next door come home during her prep. In fact, she sometimes lends her key to another missionary and he comes and chills in her house during his prep. So it seems like a fairly common practice.

So for all the whining and moaning I did on Sunday about how it’s lousy living in the shadow of my workplace, I suppose there are benefits.

I hope you’re finding the lighter side of your troubles. 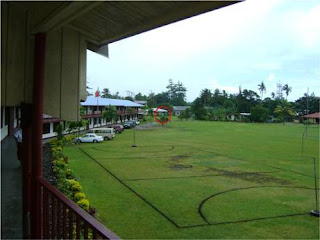 My house as viewed from my classroom door. 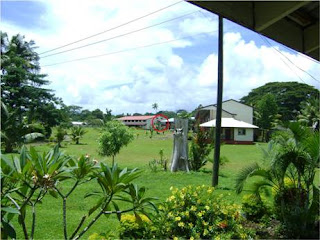 My classroom door as viewed from my house. 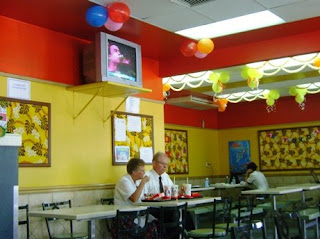 McDonald's has one of the few public restrooms in town, so I stopped in today and ran into Shane and Christian who were eating there. I snapped this picture, and it is awesome. Reminds me of "Fat Ammy's American Style Restaurant". UB40's "Red Red Wine" video playing on TV (last time I was there, Johnny Cash was on TV), a pair of Mormons directly beneath, and if you look closely, you can see the "HAPPY BIRTDAY[sic]" sign hanging in the back.
Posted by Matthew at 6:05 PM

Hope you will come to visit my blog

Have a nice day

from working night shift and having kids i have become a big fan of napping. hope you enjoy them!