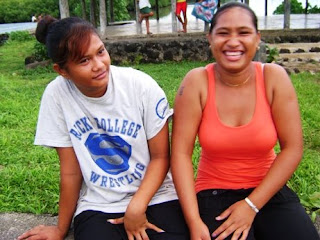 This was my third time in the village since Christmas, and things have gotten a bit routine. The bus ride is crowded, and other passengers are confused by my presence. My family is happy to see me, and I’m usually given a child to occupy within 10 minutes of my arrival. The evening centers around a church event, be it Bingo or a siva. I don’t sleep long enough for me, but my family thinks I oversleep by at least an hour. We hang out until the bus picks me up.

From a sociological / anthropological standpoint, it’s interesting to see how the town evolves from month to month. Being an outsider with a regular insider perspective provides a unique opportunity to witness the drama unfolding without being a real player in that drama.

Phil’s host father Isaako is the new Pulenu’u, or mayor. He starts his three-year term next week, succeeding K8’s host father, Malae. I asked Phil’s sister Tuese how the new Pulenu’u is chosen. She said that it involves the meeting of the 4 Laumatia families, who make a collective decision. I am unclear one how the 4 families are different and yet related, but I figure I’ll take things one step at a time.

The faleo’o in which I slept for my entire village stay has been remodeled. They took out the dividing wall so it’s an open fale once more, and then they added a smaller rectangular wing. Mele and Asolima and the 2 girls sleep out there now. The TV is also out there. The sleeping situation has been different every time I’ve been back to the village, and it makes me wonder what things were like before the Peace Corps rolled through.

Back in January, Phil’s sister Leata told me that she was planning on moving to American Samoa in February. Then in February, she told me she was leaving the first week of March. She told me not to tell anyone about these plans, so I felt a little awkward yesterday when I asked her sister if she’d left. “No. She’s at home. Where would she be leaving to go?” Later, Leata gave me a hurried explanation about her dad becoming Pulenu’u, and how she’d put plans off indefinitely. I like Leata a lot, but it made me sad.

The volleyball court was empty when I got off the bus yesterday. And the net was gone. The absence of the net was a little shocking too. We spent almost every afternoon last Fall gathered around the volleyball court, and with no net, the place seemed abandoned. Tafale and Tone invited me to walk to the next village over to watch the volleyball game there. When I asked what had happened to the Fausaga volleyball net, she shrugged.

There was another siva last night. When I attended the siva in February, there was a performance by a new local dance crew, the Vai Mai Boys. The VMB consisted of 5 solis I recognized from volleyball who had watched enough TV to choreograph a pretty good routine. At last night’s siva, the group was much bigger with about 15, and some of the original 5 had dropped. And that was only 4 weeks ago!

A different Laumatia was in town this week, and his presence was part of the reason for last night’s siva. When I was standing by the road wait for the bus this afternoon, he saw me and told me he was also going to Apia and said give me a ride. Which was awesome. He chatted me up on the way home. He owns a taxi service in Wellington, but plans on retiring in the next year and a half and moving back to Samoa. “This is freedom,” he kept saying.

So anyway, it’s difficult to say which changes are just going back to the way things were before Group 81 arrived, and which things are just the next step in Fausaga. But people were happy to see me, and as always, people I’d never seen before would call me by name and stop me on the road to say hello.

I hope people are saying hello to you. Pictures below. Happy birthday, Annie! 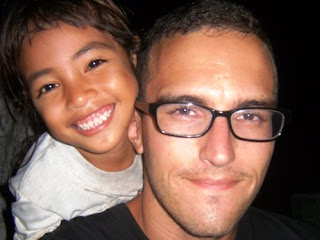 The obligatory picture of Akanese and me. 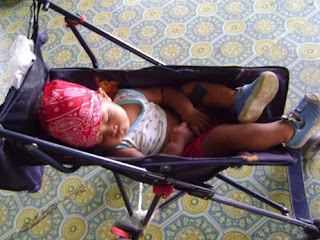 The baby has this sweet stroller where the seat can recline for a better sleeping position. There are airlines that should look into this. 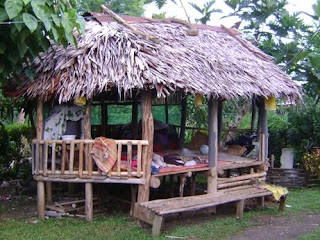 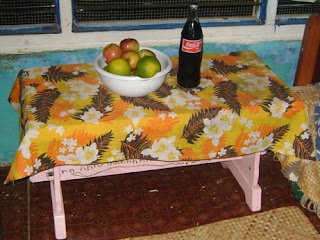 I brought fruit, a bottle of coke, and a couple bags of chips. So the fruit and the coke were neatly displayed next to my bed. Okay. 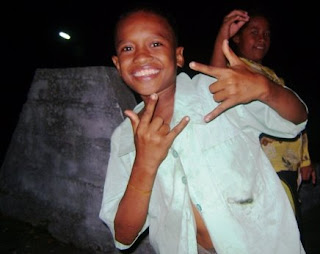 Ioane during the siva. He's the nicest kid. And that's a grave behind him. It's pretty common for families to have a grave, or more likely graves, in their front yard. And it's common to sit or climb or run or play on them. 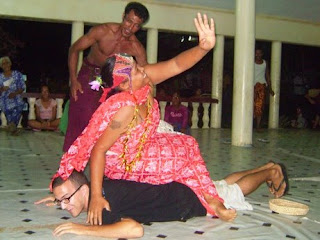 Asolima did the Taupo dance. But I felt obligated to be the Manaia, which means you lay down on the floor in front of the Taupo to sort of grovel. So Asolima sat on me. And then she grabbed one of my legs and cradled it. The crowd ate it up. 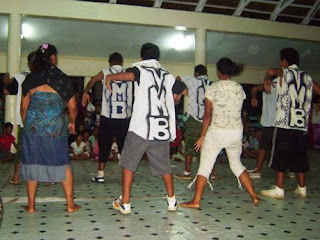 The VMB Dance Crew. Asolima and Tafale are not in the crew, but they found it hilarious to jump up and pretend like they knew the routine. It was amusing. 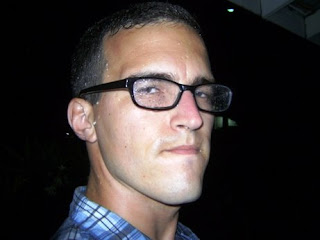 I had dinner with Cale and Sara and Koa tonight, but I forgot my camera at the Peace Corps office. So I went back, and just as I got there, it started to rain. So I hung out. Composed the blog there. Saved it to my flash drive. And finally, I toughed it out umbrella-less through the rain... only to discover when I arrived home that I forgot my camera. Again. But I wanted to post pictures from the village. So I waited until the rain let up a bit and walked back to get my stupid camera. On the way home the second time, it started to rain hard again, and it wasn't until I was back at my school that I realized I should have brought my umbrella. And then camera's battery died when I was transferring pictures to my computer. So more village photos tomorrow.

I miss your face. I got teary-eyed seeing that picture of you with Akanese.