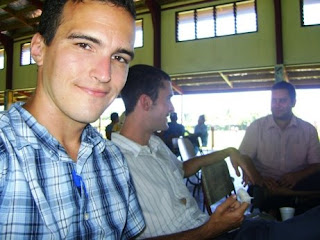 Phil texted me in the middle of my 3rd period class yesterday asking if I’d heard about a meeting that was to be held at my school today. I hadn’t heard anything about a meeting, but I don’t hear about very many things. So I asked at yesterday’s staff meeting, and indeed, all of the heads of departments for each school in the Congregationalist system met today to discuss the writing and administration of common tests that are given to students at the end of 1st and 3rd terms.

Yes. Phil came from Savai’I for a 10-minute chat. I like to imagine a day when Samoa gets email and how much mindblowingly faster work would get done.

But I suppose with great power comes great reliance on said power. Thus was the lesson learned by me and one of my students, Solinu’u. I arrived at the computer lab this morning before school started to make sure that Mavis Beacon would be ready and waiting for the other computer teacher’s classes, and while I was in there, Solinu’u came a-knocking. He asked if he could use a computer to finish typing up his Internal Assessment that was due today.

“No,” said I. Our meeting was supposed to begin at 8:30. Also, the other teacher’s class was coming into the lab first period.

The kid looked like he was going to cry, though his voice was strong. “But It’s due today,” he pleaded, showing me the Internal Assessment that he’d nicely written out by hand.

And that’s when it hit me. Before me, my school had no computers except for the one placed in the secretary’s office a month or two before the end of the school year last year. A year ago, a typed Internal Assessment was unheard of. Was 2 months really enough time to become completely reliant on technology? No.

I had called his bluff. His pained expression melted into a smirk. “Yeah,” he agreed.

He was eventually able to convince the other computer teacher to allow him to use a machine during 2nd period when she had prep and the class that I normally would have had entertained themselves in their homeroom while I was at the meeting. In fact, much of the year 13 class was also able to get in on this deal. I broke away after my 10-minute chat to print out a syllabus for a teacher from another school to find a labful of adolescents typing away in garish fonts, all of them worried about today’s impending deadline.

Greetings, Samoa! I come bearing the stress and grief of technology! Talofa!

I hope technology is bringing ease to your life. Pictures below. 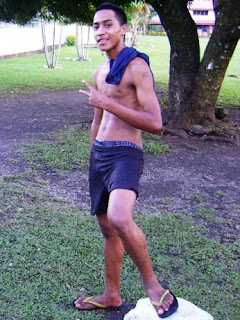 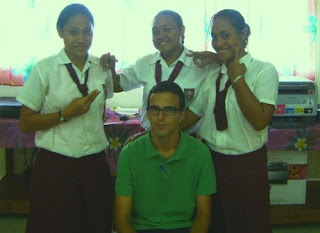 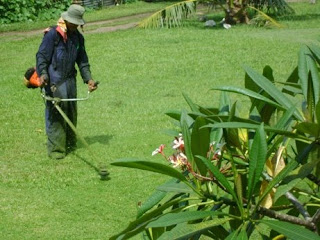 Have we talked about how weed-whacking is the grass-cutting method of choice here? The ground is so uneven that lawnmowers are not practical. This guy was doing my front yard when I got home this evening. 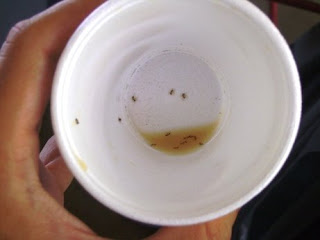 Uncle Louie hates when he has grounds in his coffee, which means he should probably stay away from here because grounds in your coffee/tea is a constant. But today brought it to a new level when I got to the bottom of my opaque tea to find not grounds, but ANTS! My guess is they were in the sugar when that was added to the tea (sugar is added to the tea while it is still in the kettle here). More tea?

Ok...you look so thin. Are you eating? I hope you get more nutrition than what's available at the bottom of your tea cup.

have u had orange leaf? i like that with no sugar ie no chance of ants :)

Ant solving problem with your sugar bowl. Put it in a bowl(bigger one) with water,(like baking a souffle) make sure the sugar container doesn't touch the sides of the bowl with water. The ants will fall in he water, as long as the two bowls don't touch one another, well except the bottom. I learned that trick from my mother while growing up there, before I married a palagi. Maybe, you have already discovered by now.