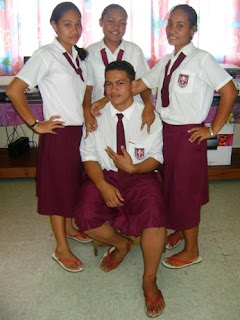 I’ve made friends with the year 13 students on campus. I feel like they’ve been more welcoming and made me feel more at home than most of the teachers on staff. Perhaps it’s because we are closer in age or because I come baring technology or because I am the arbiter of said technology. But for whatever reason, the year 13 students are really nice.

Most of the student body is really nice. It’s impossible for me to walk the 50 yards from my door to the teacher’s lounge in the morning without getting at least 15 “Morning, Mista!”s. I think more of them would be more cordial if they could sustain a conversation in English for more than greeting formalities… Or if I could sustain a conversation in Samoan beyond “Mālō!”

In the Samoan school system, most students don’t make it past year 12. At our school, we have 5 classes of year 12 students; somewhere around 200 total. Yet we only have about 30 year 13 students. So in essence, the year 13s are the cream of the crop and the year 13 school year is somewhere in between a college prep year and the first year of college. This may explain the collegially academic atmosphere I talked about yesterday in the caption of the last picture.

And it really does feel like they’re in college. I helped put together the schedule, so I know they have classes, but often they hang out on the stoop of my classroom, looking through notes and looking longingly past me toward the computers in the lab. “Don’t you have somewhere to be?” I sometimes ask.

They look at me, shake their heads, and then look past me toward the computers again. Hint, hint.

I admit, it boosts my ego to be the popular guy on campus, even if it’s only because I have the coolest toys. And I see these kids so often, I know their names. I had my 11.3 class today, and I know none of their names (Yes. I’m embarrassed about this.). But I know Mira and Filifili very well even though they aren’t enrolled in any computer classes.

My hope is that their interest and knowledge of computers will osmote to the year 13s who are actually in my class because, truth be told, I’m a little frightened by the lack of skill in my class. They have a huge test in 6 months, and they are chillingly ragtag. Today I glossed over drag-and-drop, assuming it to be a simple maneuver, and that turned into a 20-minute tangent.

And students are trained to answer “Yes!” to questions here, whether they understand the question or not. So I’ll ask, “Does everybody understand?” And I get a spirited and immediate, “Yes!” Riiiight. I am not nearly as confident as they are.

But the fun part of that year 13 class is there are only 5 students. So it really does feel like we’re all just hanging out. Last Friday I got bored with teaching computers and we didn’t have enough time for new material anyway. So we had mental math races.

It’s not to the point that I feel like I can set them free on the computers and we can all just chill for an hour, but if I can find a mildly educational way to pass the time and have fun and feel casual, I’m all for it.

I hope you are having fun in a casually educational setting too. Pictures below. 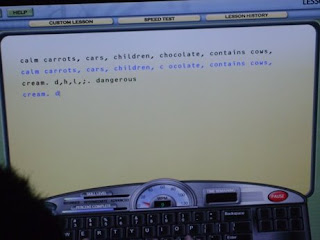 Sometimes the Mavis Beacon typing exercises are just odd. In the one above, it asks you to type, "calm carrots, cars, children, chocolate, contains cows, cream. d,h,l,;. dangerous." What is this diabolical list? 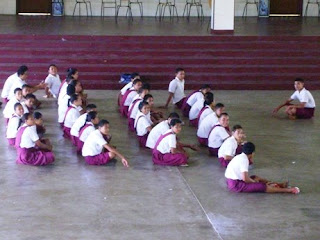 My classroom sits on top of the Great Hall. So I hear kids practicing the Sasa dance, which we did in training. Kinda fun. 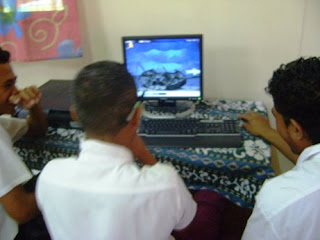 I let my 11.3 class play TyperShark today. In the game, if you don't type the words or letters in time, the shark eats you (errr... the diver you embody on the screen). The kids find this hilarious and purposely start the game and press no keys, eagerly awaiting the shark attack. The best part, though, is when the game ends after the players 3rd death. A screen comes up saying, "Game over." And the three of them start calmly and politely applauding. Hilarious, and yet completely unproductive.