Everybody Knows Your Name 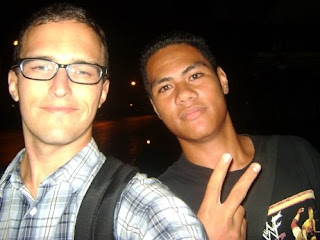 Last summer in San Francisco, I attended a going away party for my friend Rahul. We had dinner at his place and then headed to a nightclub in The Mission. During the cab ride, the driver turned to the guy sitting next to me, one of Rahul’s investment banker friends, and asked, “Is your name Sunil?” The kid looked surprised and then nodded hesitantly. “Yeah. I thought I recognized you. You work at Bank of America” It was unclear if this last part was a statement or a question. Sunil nodded. “And you live at… Franklin and California.” It was a little creepy, but completely reasonable. Sunil had no car and worked late most nights, as most I-bankers did at the time (before the mass lay-offs began), and this cab driver worked the financial district regularly, so they crossed paths often. But it was still weird for two strangers to meet so regularly in a big city like San Francisco.

I found myself in a similar situation a few minutes ago. It’s pouring rain right now, and I took a cab home from Erik’s place. I told the cab driver where I was headed, so he gets on his walkie-talkie and calls out in Samoan, “Yeah. I just picked up a Peace Corps. I’m taking him to his school.” A little less creepy since he didn’t know my name. And I had just told him where I worked. But still… he referred to me with a familiarity that was a little disquieting.

Samoa is largely a rural country, and most volunteers end up in some sort of village setting, but a few of us do live in Apia. That distinction is important, but also a little deceptive; it makes Apia sound like an urban metropolis, and New York City it is not. Compared to most incorporated cities in America, Apia is fairly small. In The States, it would probably referred to as a “town” technically. And as much as it doesn’t have the intimacy of village life that so many other volunteers deal with, there is the sense that everyone here knows your business.

I walked from my house to the Peace Corps office and back tonight. It’s a short walk, but I ran into Phil’s brother from the host village, a woman waved at me and called out my name, and I ran into one of the students from my 11.4 class. This is a short walk through a relatively urban environment and 3 people recognized me.

Another example was when a bunch of us were at the local bar for St. Patrick’s Day. While I ordered a drink, a man sitting at the bar struck up a conversation with me. He manages a rugby team that had toured The States. He was chatty, and I humoured him, and conversation got around to his brother working for the Peace Corps. It turns out his brother is H.P. who is the director of training who headed up all of our sessions while we lived in the host village.

There’s no way to prove it, but I suspect that if you did a sociological experiment, you’d find that six degrees of separation are far more than are necessary in Samoa. I’d hypothesize that most people connect to each other within 4, and most times less than that. I acknowledge that my Peace Corps brethren and I stick out more than the average Samoan, and that could play a part in making it easy for people to recognize us and make connections. But still, in a relatively small population with a collectivist culture, it isn’t surprising that people would be well-connected to one another.

But it’s still a little odd when the cab driver knows more about you than you expected.

I hope you enjoyed March. Pictures below. 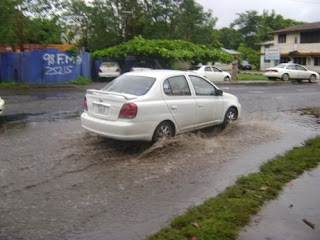 It's been rainy here lately. And Apia tends to flood. 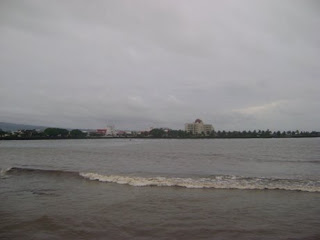 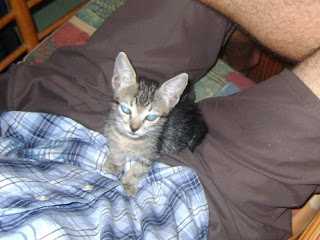 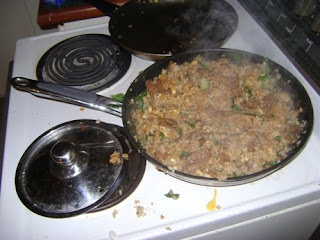 Erik made fried rice for Trent and me.

Congrats! You're the "Peace Corps Volunteer Blog of the Day" on the National Peace Corps Association's Twitter Feed (http://twitter.com/pcorpsconnect).

When you have a chance, check out our new website at http://www.peacecorpsconnect.org and sign onto the social networking area, Connected Peace Corps. It's a great way to interact with members of the Peace Corps Community. Family and friends of Peace Corps are welcome too!

Wow! That is very cool.

Another well-written story about a subject that could be considered banal. But you made it interesting and without being complex. You're definitely getting the hang of it.

Before the time of electricity in Savaii, there were no phones to connect Savaii to Upolu, some people in Savaii have radios with an antennae and ran with Everready(sp?) batteries. Every evening the 2AP broadcasted important messages from families in Upolu to Savaii...my point in this is before that message came on in the evening most of Savaii knew about it....word of mouth or is gossipy???