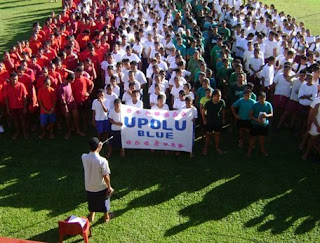 Did you ever watch “Wild and Crazy Kids” on Nickelodeon? Each week they would go to a different American middle school, break the student body into teams, and have kids compete in different sports. Each team would wear a different colored t-shirt, and among the show’s hosts was Cuba Gooding Jr.’s brother, Omar Gooding. Sports Day at my school reminded me of a 6-hour episode of that show with the notable absence of Mr. Gooding.

One of the teachers who sits on the organizing committee came to the computer lab after school yesterday and asked me to type a new version of the schedule for today. And the day went surprisingly close to the plan. There was a short parade around the field, a short prayer, the singing of the national anthem by the collective student body, and then it was game time.

Two weeks ago the school was divided into four “houses” named for the 4 major islands of Samoa: Savai’i, Upolu, Manono, and Gryffindor… whoops, I mean Apolima. Each house was assigned a color: Red, Blue, Gold, and Green respectively. Your form class (homeroom) defined your house. I don’t have a form room, so I was assigned to the Sports Committee, which meant instead of coaching, or being able to freely walk around and watch the games, I was assigned to ref girls’ volleyball for the entire day.

I was mostly cool with this, although there were several drawbacks. First, it would have been cool to have a little more variety in my day. Second, it doesn’t make for a lot of variation in the photos below. And last, it meant standing in one place in broad, tropical sunlight for 5.5 hours. I wore sunscreen, and I seem to have escaped the day without getting burned, but still… That much sun gets a little taxing.

It was good times though. I remember at Pioneer Elementary we had Field Day, and at USC we had intramural sports, and, appropriately, the day felt like a hybrid of the 2. The level of play was surprisingly competitive, which felt more like my college experience. But I think the only people who really cared about intramural sports in college were the ones who played, whereas today the entire student body was out cheering when they weren’t playing.

I co-reffed my games with the other computer teacher. She was more in charge of blowing the whistle, mediating boundaries (which were not clearly marked and ended up being defined on one side of the court by her sandals and on the other side by my sandals), and generally arbitrating play. I kept score, which was good because I am not confident in my knowledge of the rules of Samoan volleyball. At one point yesterday, I was told I’d be reffing rugby, which would have been a complete mockery since I know absolutely nothing about the sport. I’m good at making tally marks though, and was thus qualified for my job.

There was one point in the day when I juxtaposed the colors of the Upolu and Savai’i houses and incorrectly gave the win to Upolu. And Savai’i was not having that. It caused quite the stir and everything was put on hold for about 20 minutes while the mess was resolved. Due to the language barrier, I was not clear on what the issue was for the first 18 minutes, which made things take longer. But when I was finally included in the conversation, we were able to start again relatively quickly.

In all, we reffed 12 games, which actually took the entire 5.5 hours. There was no break, but there were students who would occasionally come around to serve me Kool-Aid.

After the games were over and the house points were being tallied, teachers representing the different houses played some entertaining games. The cruelest involved a version of Bobbing for Apples in which the bobber must eat the entire apple while it is submerged. This seemed like a stone’s throw from waterboarding to me, but it made for great laughs!

In the end, Upolu won the junior level, Savai’i won the intermediate level, and Apolima won the senior level. Mostly it was just a fun day, and I was pleased to take a break from the computer lab. As were the students, I’m sure. As was my voice definitely.

I hope you’re keeping good tally too. Pictures below. 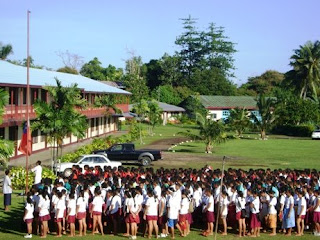 National Anthem and Raising of the Flag. 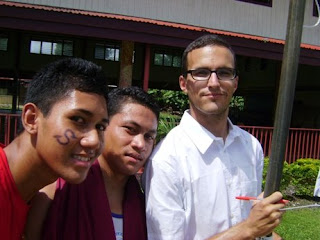 Chrispune, Filifili, and Me. As taken from the distance of Chrispune's arm during a brief break in play. 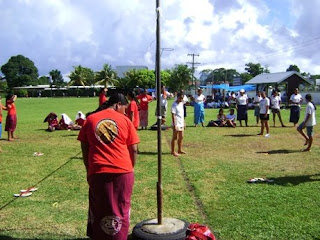 I spent the day standing on the cement at the bottom of this pole. 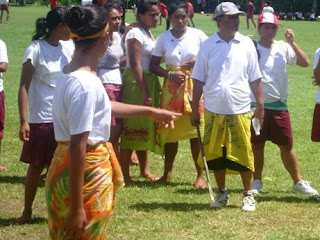 The teacher in the yellow lavalava on the right wore an oversized Yankee's cap, and would occasionally swat at players with the large stick she's holding. The players found this hilarious. 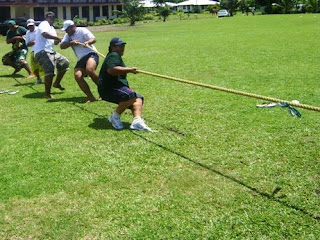 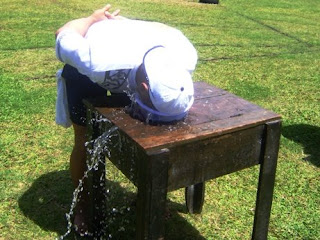 haha thanks for ur faithful blogging. i will keep commenting frequently even if such commenting goes unacknowledged haha :P

looks like a fun day! that tug of war looks crazy. id be afraid of rope burn. a samoan girl can carry something like 30 coconuts on her shoulders...? DANG. american girl = weaksauce