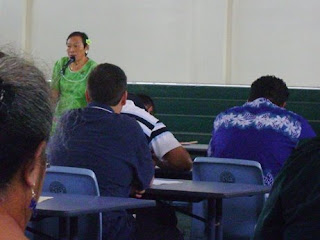 In the aftermath of Michael Richards’ stand-up comedy outburst a couple years back, I remember reading an article that speculated that part of the reason he wasn’t able to deal with the heckler more gracefully was that he was an actor by trade, not a comedian. Though the two positions can be very closely related, there are clear distinctions between the two, and while conventional wisdom allows the two jobs to become interchangeable, the industry should be more weary of those who try the crossover.

This inappropriate mix of roles pops up in a lot of industries. When I was promoted from Account Coordinator to Account Manager at CNET, my roles were vastly different, and I don’t know that excelling at the former translated to much of any success in the latter. And I ended up being laid off in the AM role, so take that for what you will.

Anyway, another crossover that I’ve never fully understood is education. I understand that it’s good for administrators to have teaching experience so they can better empathize with their charges, but it seems to me that succeeding at one does not translate to being effective at the other.

That seemed to be the case today at the Samoan Ministry of Education, Sports and Culture’s New Teacher Meeting. The woman who led the meeting oozed an authoritarian air that was probably effective with fifth graders back in the day, but seemed out of place at our meeting.

She started off the meeting by going down a list of rules. “Attendance. We usually have a lot of people at these things in the morning, and then less after tea, and then even less after lunch. It is very important that you are here the entire day.”

Everything was said sternly with not even a hint of conviviality or camaraderie. “Our tea break is 30 minutes. It begins at 10:20 and ends at 10:50. You should be back in your seat by 10:50.” It was the kind of tone that eCivis would take: condescending and demeaning.

And then it got outright ridiculous. “Toilet tissues. We only brought 2 rolls so please only wipe so there will be enough for everyone else.” Dead serious. Direct quote. I heard it, found it hilarious, and wrote it down immediately because I wanted to be sure to remember. Micro-managing the Charmin. Wowa.

Later, when another of the facilitators asked for volunteers to participate in a short activity and got few hands, Ms. Whipple grabbed the microphone and said in that same disciplinarian tone, “This is not a sleeping hall. Please sit up and pay attention.” Way to inspire participation, Debbie Downer.

I’m being hard on this lady, but I should point out that I had the same experiences in Oakland. The women who ran the Teaching Fellows program were awe-inspiring from a teaching standpoint. But when it came to managing subordinates, they could not discern us from the eighth graders they used to know.

Some teachers make great administrators. My Pule here is well-loved by the staff, much because of his background in the classroom. Even my principal in Oakland, flawed as she was, was at her best when she could identify with me because of her own experiences. But some just don’t know how to carry it when working with other adults.

I hope you are using as much TP as you need. One picture below. 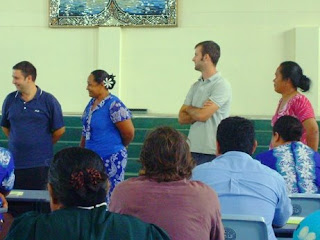 Koa and Jordan volunteered. They had to choose the next "Ms. Samoa" from the audience of teachers and explain why they chose that particular woman. The exercise illustrated how each of us has different criteria and it is inherently difficult to find a common grading system. It was funny and meaningful.
Posted by Matthew at 5:34 PM

Have been enjoying the PCV's blogs for the last few months; yours ranks among the best. You must have been an English teacher's dream. In fact, you are living my dream, never fulfilled my dream to return to Samoa and teach. Best to you.

haha in her defense, i can understand the whole TP comment. they dont sell them by the huge 24 packs like here in the states at costo or kmart. most people buy them by the single and the ones that do come in the packs are so tiny! charmin would be a luxury- ha

i never left my TP out in the open, and tried to keep a stash in case of emergency- ie i didnt want to use notebook paper to wipe!! :P