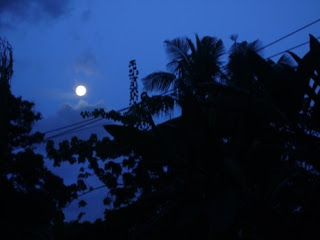 Though I was laid off in March of last year, my severance lasted until the end of May, which means I wasn’t added to the un- employment statistics until then. And I remember hearing in early June that May had been the largest increase in unemployment for some time. I find this almost completely coincidental. The day CNET called me to tell me I had a job, there was a news story about how the CEO had resigned. The company was in a precarious state for much of the time I was there, and I honestly believe it had little to do with the faltering economy. We made jokes about it, in fact. I remember the head of our department quoting Urbandictionary.com’s definition of “Bear Sterns-ing”; that is, thinking you did quite well on a task only to discover you’d failed miserably.

So the economy hadn’t really hit its stride in the downward spiral by May 2008. It sat in the figurative toilet, but it hadn’t been flushed quite yet. I spent the summer interviewing around between episodes of a string of different TV shows on DVD, and by October, I was on a plane to Apia.

For most of training, we were oblivious to any American news. Tim Lincecum won the Cy Young Award, Barack Obama won the presidential election, and Janet Jackson might be pregnant. Globalization is the way of the future, but it takes a while for Fausaga to feel the effects of Wall Street.

Since training has ended, it’s still been difficult to see any direct effects of the global economic crisis. Volunteers from groups that have been here longer have seen an uptick in the price of bread and rice and other goods, as well as increases in transportation fares. I’m told that the ferry used to be cheaper, and that the new $12 WST ticket is steep compared to the old rate.

The only tangible effect that I’ve noticed is that Peace Corps Samoa has had to streamline costs including paring down staff. And even that is a bit tangential in the sense that it’s a congressional budgetary issue rather than a direct effect of the economy massacring the private sector.

But other than that, it’s hard to tell that the rest of the world is in crisis mode. Apia is developing all over the place. One small grocery store, Lucky Foodtown, has temporarily moved to a block down the street while they remodel their more permanent location. The largest grocery store in town, Farmer Joe, has done quite a bit of remodeling since group 81 arrived. They’ve added an air-conditioned liquor section, upgraded the meat and produce sections, and implemented a uniform policy for its staff. A large hotel is under construction in the middle of downtown Apia.

This last part is particularly interesting as I compare and contrast with the way things are here. For the most part, I can relate to the situation because I find myself taking the same strides here to save money. I eat out less than I did in The States, I avoid taking taxis, I spend quite a bit of time scraping out the peanut butter jar before I am completely satisfied that I have used it all.

But it’s even more interesting to compare the profiles of ordinary Americans trying to make ends meet with the lives of rural Samoans trying to do the same. Life out in the village is tough as hell, and it’s a constant struggle to get by, but that’s not because of the economic crisis, it’s just the way it is here. And I think the people in rural Samoa are happier than the stressed out Americans.

I’m not really sure that I have a point here… All I’m trying to say is it’s eye-opening.

I hope your eyes are being opened too. Pictures below. 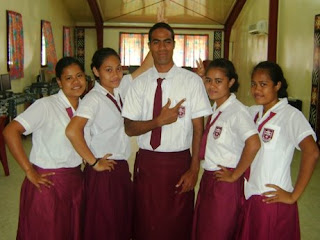 My year 13 class requested that I take their picture today. Marie's bunny ears on Sinaumea were done with a shockingly straight face. It's sad that they're kinda washed out by the ceiling. 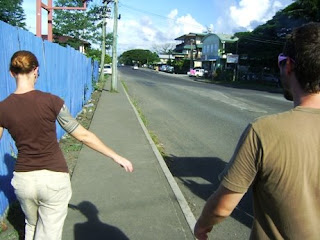 I ran into Cale and Sara at the office. We shared an impromptu early dinner/late lunch. 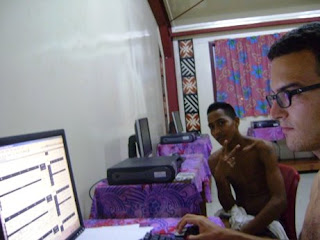 I had to go into the computer lab late this evening to input the changes for the school schedule that go into effect tomorrow (Several new teachers started this week). Solinuu insisted on hanging out in the lab despite my refusal to turn on the air conditioning. So there we sat in what must have been 90+ degree heat, our shirts off, making changes to a dull Excel file. It was weird.

This is one of your best logs. You're telling it as it is in simple terms. Great! Forget the complexities and creation of a style; keep the style simple and you'll be amazed at the flexibility in writing. I especially liked, " Life out in the village is tough as hell, and it’s a constant struggle to get by, but that’s not because of the economic crisis, it’s just the way it is here. "

I feel that in the U.S., there is a rather large percentage either booming or busting. There are countless stories of individuals defaulting on their home loans, going to food banks for the first time, etc.

Then there are those lucky enough like myself to still be gainfully employed. (and not facing an unrealistic mortgage)

For sure, it's much hard to sell online advertising now, but if you have a steady income in this environment, it's actually a pretty good time.

Restaurants, clothes, cars, travel, etc, are all much cheaper now.

Plus, for the first time, I fee like home ownership is attainable in the Bay Area.

You're right -- NPR is chock-full of doom and gloom, as is the news in general. Obviously it's a horrible reflection of the dire circumstances so many people are actually living through in the states and elsewhere, but I can't help but wonder if such brutally honest news isn't in fact worsening the situation. After listening to those stories I want to sell all my belongings and keep my money in a shoebox, lest I end-up like the Joads. But then, on a small scale, I'm contributing the economic decline.

Or perhaps I'm just bummed from waking-up every morning to tales of current gloom and an even gloomier future. I'd love to wake up to a story about the discovery of cost- and pollution-free power source. An AIDS vaccine. Maybe that eating lots of smoked bacon makes you immune to cancer. Hell, even a really raunchy political sex scandal (that doesn't involve minors or assault).

Why did you refuse to put on the airconditioner?

Friends moved back to Auala in Savaii because they couldn't make a go at it here in Idaho. He's taking care of huge plantation now because his dad passes away last year. Wish we did move there in these bad times here in the States.