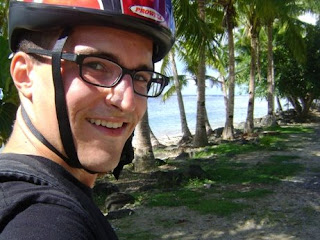 I realize that being in Apia makes me life easier than many others, but those who are privileged with consistency are more apt to complain when things go wrong. We are doomed to make assumptions and take things for granted, and when they’re taken away from us, we don’t know what to do. Although I will say that being in the Peace Corps has taught me to deal more gracefully with such situations.

Let me explain. See, I went on another bike ride to Luatuanu’u today after last Sunday’s relative success. I went by myself this week, in part because I felt like going alone, and in part because I was too lazy to invite others or coordinate a meeting time and location. I left earlier, and consequently, I was able to go farther and stay there longer. I went about a quarter mile past the actual surfing spot before I turned around to see if I could find a good piece of beach where I could plant myself for a while.

And then a cold front came along out of nowhere, and poof! Rain. I don’t know that I will ever get used to rain without rainclouds. I didn’t get a picture of it, but I was essentially looking at sunny, blue sky and pouring rain. I stubbornly stayed on the beach for about 10 minutes before the weather broke my will. I headed home.

When I rolled up, my neighbor Maegi was walking up to her door carrying a bucket. “There’s no water,” she told me.

Like I said, living in Apia, our water and power is fairly consistent. A couple weeks back, Ryan 79’s village had their water shut off for the span of a couple of weeks. Meghan 77 told us horror stories about being in the shower covered in soap only to have the water go off mid-shower. My water goes off late at night occasionally, which can mean brushing my teeth with bottled water, or foregoing the whole teeth-cleaning routine all together.

But having the water out in the middle of the day on a Sunday is just lousy. It’s particularly lousy being that I was drenched in a smelly combination of sweat and rain. So, living alone in my bachelor pad as I do, I took off my nasty clothes and lounged naked for about an hour until the water came back on (I didn’t get a picture of this either). It’s an exciting moment when you hear the toilet reservoir start to refill itself. That’s the sound of freedom. Haha.

When the shower started to work too, I jumped in. Big mistake.

See, when the shower water comes back on, everyone else who had been lounging around their bachelor pad naked, or were otherwise waiting to shower, jumps in too. So the awesome water pressure slows and then drops to zero. And by then, I was covered in soap.

And that’s when the privileged side of me came out. I could handle the rain with no clouds. I was okay waiting for the water to return. But to have to stand there, all lathered up, staring at the ridiculous trickle coming from the showerhead, I could bear it (bare it?) no longer.

So I stood there. Yelling at the showerhead. Sitting, waiting, wishing. Angrily.

So apologizes to those of you who deal with this on a regular basis and accept it as a part of life. I’m just asking that the shower come on and stay on.

I hope you are able to get the shampoo out before it runs into your eyes. Pictures below. 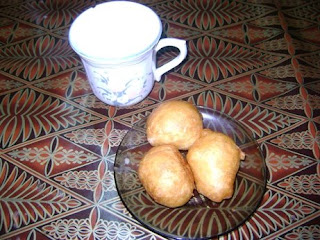 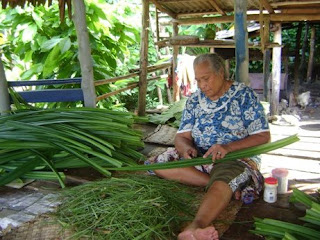 Mele cutting up palm branches to make a fala, a traditional Samoan mat. 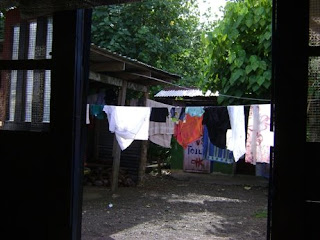 The scene out the door during my breakfast yesterday. Clothes on the line and the bathroom and shower in the back. 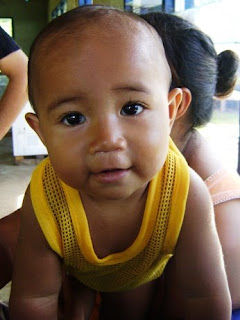 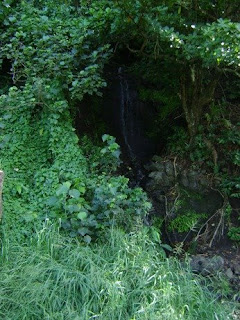 A small waterfall I saw during my bike ride today. 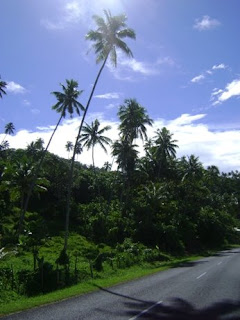 Another bike ride picture. I didn't realize the palm tree's shadow was partly in frame until I saw it on the computer, and now I'm bummed I didn't capture the whole thing. 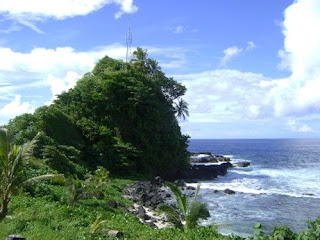 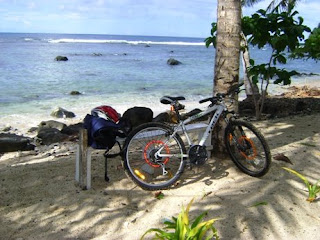 My bike next to the beach.
Posted by Matthew at 7:26 PM

i love panekeke! theyre like zeppolis without the powdered sugar :P

Are you watching lost online while in Samoa? Also, the baby is getting bigger each time I see her picture. You should make framed collages of the scenic shots. Those always turn out great.

Um, you don't have water tanks?!