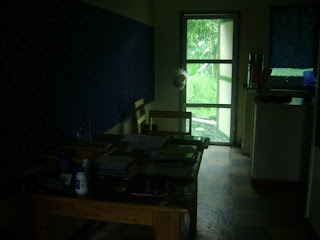 Phil thinks it looks like a scene out of 28 Days Later or Evil Dead 2 or some other zombie movie. I’d also compare it to that seen in Vanilla Sky where Tom Cruise runs into Time Square and finds it completely empty. No cars, no pedestrians, nobody. That’s Apia on any given Sunday: a ghost town.

I briefly mentioned in the post I wrote our very first Sunday in country. That particular Sunday was a holiday, White Sunday, and while the absence of people was striking, it was hard to know whether that was how things were every Sunday, or if things were deserted because it was a holiday. But no. Things are always like that on Sundays.

The Sabbath is taken very seriously in Samoa. It is the Day of Rest in the most literal sense imaginable. People get up early for church and then come home and take intensely long naps before getting up for the second round of church services late in the afternoon.

Being a palagi, I don’t feel too called to adhere very strictly to this policy. One of the grocery stores in town, Farmer Joe, is open all day Sunday, and I go almost every week. And then I’ll go on a walk or a bike ride. Or I’ll plan ahead to clean the house or sort through papers or do school work on Sunday afternoon.

Inevitably though, I find my Sundays becoming increasingly Samoan. I get home, and the urge to plop down on the nearest surface for a good nap is overwhelming. It’s like the sleepiness of the surrounding neighborhood is in the wind, bringing lethargy through the mosquito screens.

And it’s not just at home when the urge the snooze hits. One of my first Sundays living in town, I went for a walk along the sea wall, and the absence of activity weirded out my brain. The waves crashed lackadaisically, there was a light breeze, the sun beat relentlessly, and other than that, nothing. I had to take a 10-minute power nap on a park bench to ensure I had the energy to get home.

Today it rained, which felt a little like the gods upping the ante on the “day of rest” thing. Productivity was out of the question. So I read my book for a bit, wading slowly into a 2-hour nap.

It was still raining when I woke up. It was a good moment. It felt like what I imagined the Peace Corps would be like. Humidity. Torrential rain. Banana trees out the window. iTunes played a Spanish song from Pink Martini. Admittedly, it was more of what I imagined Peace Corps to be like in South America, but still a satisfying moment.

The rain preempted the bike ride. So I’ve spent the rest of today playing Minesweeper and Mah Jong and loathing the papers that need to be graded before tomorrow.

I remember reading something about how yawning is so innate in the human psyche that simply reading the word can make a person yawn. And maybe it’s that lethargy in the air again, but writing a blog post about sleepiness sure doesn’t help with any post-blog-posting productivity.

I hope you feel a nap coming on too. Pictures below. 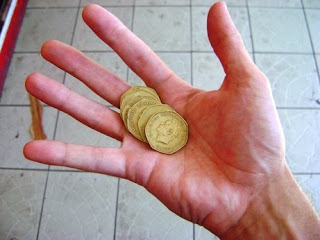 There are no $1 WST bills. Only $1 coins. And when I bought cookies yesterday, my $6 change was given to me in coins. It was difficult to remember that they weren't arcade tokens. 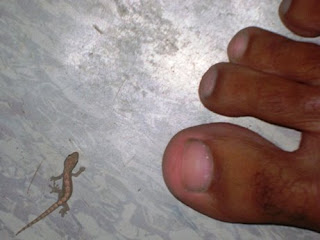 Saw this guy running around the house last night. I was surprised I could get my toes so close without him running away.
Posted by Matthew at 6:11 PM

Hi Matt! You can lift it never anticipate to move away. They're so much friendly like Samoan People. :) :D