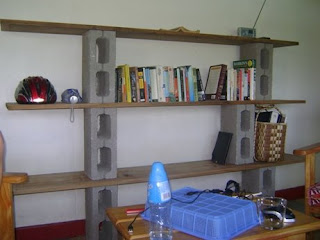 Today was a landmark day in my Peace Corps experience, if only for the fact that I’ve been itching for a shelf since the moment I moved into my house. So many different things have stood in the way of me acquiring a shelf, but today I finally bit the bullet—and mind you there was quite a bit of figurative bullet-biting involved—and now I have a shelf.

Yesterday afternoon, Filifili asked if he could leave his backpack at my house for the night because it was too heavy to carry home. He’s a year 13 student who is not my class, and their history teacher had scheduled a class for Satuday morning. At first I was weary of a student leaving something at my house, but Maegi, my missionary neighbor, happened to walk by at the time, and so I played it off as a joke, “Hey Maegi, Filifili wants to leave his bag at your house for the night.”

Maegi shrugged and said, “Well don’t come knocking too early.” And her being cool with it made me feel like I could be okay with it. So Filifili left his bag at my place.

That meant I had to wait for him to come pick it up after class this morning. He came by around 10:45 a.m., which left little time to get my shelf before shops start to close at noon. But I had little else to do today, and I’ve been meaning to get this shelf for 3 months. So I buckled down and headed to the hardware store.

Part of the problem in communicating with the people at the hardware store—beyond the language barrier—was I had little idea of what I wanted. So I told the guy, “I need 3 pieces of wood, 1 foot by 8 feet.”

“Sure.” I realized that he was asking if I wanted a 1” x 8” piece of wood. But whatever. This was progress.

So the guy goes to get the saw. I had this done at Home Depot several times during college. They have their elaborate circle saw setup, and they measure it and saw it, and the whole thing takes 5 minutes.

The guy comes back with a hack saw and a tape measure.

After 15 minutes, the job is done, and I head over to pay. Places that take credit card are rare in Samoa, but certainly the largest hardware store in Apia will take Visa. Right?

Wrong. I head to the bank. It’s 11:42, and the girl at the cash register tells me that she’s closing out and I’ll need to pay at the other end of the store. The missionaries had told me that the hardware store would deliver the stuff to my house for free. I ask the girl about this and she mumbles something about asking someone else.

I arrive back at the hardware store at 11:53. I walk back to the original register and ask the girl about what I should tell the people at the front. She writes the specs of the 1”x12” wood on a Post-It. I take it to the girl up front, who tells me that 1”x12”s don’t exist, which is amazing because what was that guy doing with the hack saw?

It takes 5 minutes for them to realize that they do indeed exist and for me to pay. I head back to the lumber section. The guy who cut the wood asks about my car.

“Is there a truck that can deliver it to my house?”

Ugh. So I got a taxi van. It cost me $5, which was $5 fewer than what I was expecting. We loaded it up and the rest was easy.

So it was some teeth-pulling and hoop-jumping—as much as I’d expected—but I have a shelf now, and it already brings the room together well. So now I’m in the market for a new project… teaching Samoan high schoolers to use computers? Ehhh maybe.

I hope your Saturday was also productive. Sorry. No pictures below. 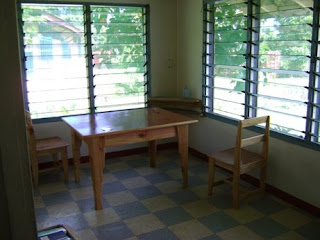 Day I moved in. 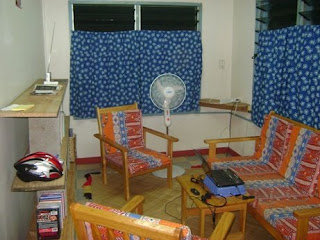 Labels: Household, Moving On In, Weekend

ha i like how u used the cement blocks to create of design...:)

My husband did exactly that(shelf) when he taught as a Missionary teacher at Chanel College and Logoipulotu College.