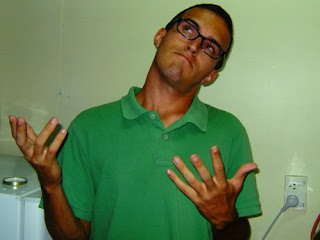 “Where’s your girl?” In training, we were warned that we’d get this question often, and they were not joking. While I don’t get this question every day, I sometimes get it multiple times a day, so I’m going to say I answer this question about once a day on average. I get this question from my host family, from my pule, from other teachers, from shopkeepers in town, from passengers on the bus, from Peace Corps staff, and from whatever other random Samoan I bump into.

It seems to be the conversation starter of choice; a way to break the ice. And at times I feel like it’s the subsequent conversation when the cross-cultural connections are forged and reaffirmed. Whether or not the question is posed by someone I’m familiar with, the person has lobbed the ball of Samoan conversation over the plate, but the way I swing at the ball determines how it will be played.

Weak responses yield weak conversation, the weakest of which is, “She’s in America.” You give that answer and you get a disappointed face. You were given a juicy opportunity, and you did nothing with it. The Samoan has little other choice but to respond with, “Oh.” You’ve killed the conversation, which may have been the objective, but in a boring and lazy manner.

Another response is “Leai se teine,” I have no girl. This response can be the equivalent of choking or a good sacrifice fly depending on how conversation goes after that. The Samoan is going to hurl it right back at you, “Why not?” If you shrug, you’re out. But if you come back with something matter-of-fact, and you say it in Samoan, the crowd cheers. “E tagata tele!” Too expensive! This results in a pleasant smile. Maybe even a laugh. Your runner on third just scored.

The easiest way to hit the ball well is to explain exactly where you hypothetical teine is that prevents her from being present at the conversation. A small laugh and “E moe,” she’s sleeping, is a solid go-to. This will elicit a laugh followed by one or two follow up questions. “In your house?” “Oh yes. She sleeps too much.” This is gold. You’ll have them rolling on the floor.

The homerun is like the base hit except slightly more involved and also requires a bit more comic timing. “Leai to'atasi teine. E to'afitu teine… (pause pause)… Le Aso Sā, le Aso gafua, le Aso lua ….” That is, “I don’t have one girl. I have seven girls: one on Sunday, one on Monday one on Tuesday…” This one’s difficult to pull off because my Samoan isn’t that good. The little script above is a little incomplete. It requires gestures and intonation to really bring the joke home, so often, it’s not worth the effort. But when it works, it works well.

It seems like the rule is that the more outrageous my response, the better. Very rarely is the Samoan actually enquiring into my social life. It’s only a conversation starter, and if I can take their lob and hit it back with a joke, that’s sufficient. But even more than that, it’s a sort of social litmus test. Perhaps the ground out isn’t a big deal. But with the base hit comes feelings of good will.

I hope you’re not sleeping too long. Pictures below. Hope you enjoyed St. Patrick’s Day. 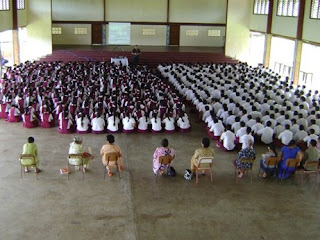 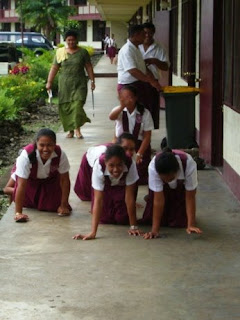 I think these girls were crawling in order to hide from someone in the classroom, but it was bizarre so I took their picture. And then they were embarrassed and giggly.
Posted by Matthew at 6:19 PM

I truly enjoy your blog! You must have been an English teacher's dream, your writing style is wonderful, both informative and entertaining. (I'm a retired English teacher) I hope I shall get to meet you in June when I come to Samoa.

Matt, hate to sound like a broken record but seriously, o "fea lou teine?" lol. You've really got the culture down pat and even picked up on little mannerisms which is fantastic. You're blog is simply amazing. Witty. Direct. Informative. If you manage to get tickets to the Miss Samoa Pageant next month I can only hope that I bump into you. Samoa here I come! Love your work :)

It's true to have some responses ready judging your mood and the person asking. Base Hit and Homerun would be responses I'd fall over LOL.

I thought you're a tremendous Computer Studies teacher, Socialist and I wished you was my ENGLISH teacher back then lol Just go through your blog and read most of your time stories and I guess it was amazing and memorable. LAWL :D very formality and necessarily ;)