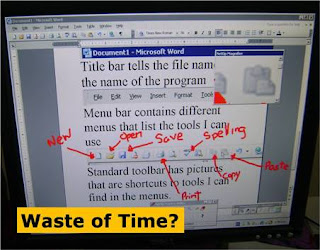 If you have enough computer savvy to access my blog, I’m assuming you’re probably familiar with the ins and outs of Microsoft Word. You’ve probably had at least some exposure to PowerPoint and Excel, but you know Microsoft Word. You know how to indent, italicize, double space, check spelling. And any part that you don’t know how to do or don’t remember how to do, you could probably figure out intuitively inside of 5 minutes.

So how did you learn to use Word? There may be a fringe few who took a Microsoft Office Suite class back in the mid- to late-1990s, but I’m guessing the great majority of us simply learned by doing. You had to write a paper for a class, a resume for a job, an official letter to someone, and so you opened up Word and started writing. And when you need to align the text on the right side of the page, you figured it out. Word is designed so that you can figure things out.

For the rest of the week, I’m implementing this as a teaching strategy. I spent the day teaching copy-and-paste today, and it was a mess. I would go through it step-by-step with the class, and then release them to get it done on their own. Half the groups didn’t know where to start, no matter how basic the task, and so I’d have to sit and walk each of these groups through the process, one by one. Meanwhile, other groups finished quickly.

The saying, “Idle hands do the devil’s work” originated in a computer class.

So starting tomorrow, I’m going to harness that energy and curiosity by handing out hard copies of a document and having them re-create it with little to no instruction. They will be allowed to explore the depths of the program until their hearts are content, and they’ll have a specific goal to work toward. And yeah. I’ll make myself available to make the toolbars reappear.

I see 3 potential drawbacks to this plan:So that’s why I’m giving it a week. Maybe I’ll give a quiz next Tuesday to see if this method has stickiness.

I don’t know if it makes sense to try this with Excel; it seems a lot more nuanced and tricky, but Word has nothing to hide. So I guess we’ll see.

I hope you’re re-evaluating your methods too. Pictures below. 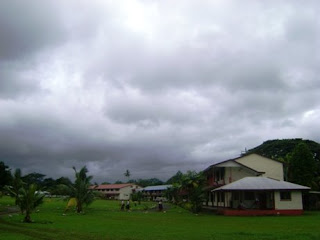 It was overcast for the entire day today with occasional rain. Ominous, ay? 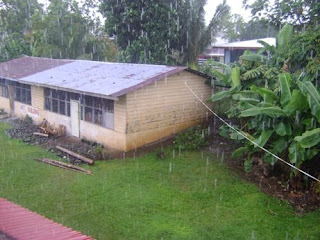 The art building outside my classroom in the rain. 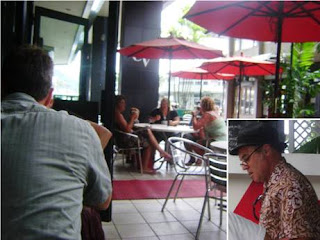 I ran into Koa sitting on the patio in an area of Apia nicknamed Palagi Alley for the people who frequent the area. This evening was one of those moments when everyone there made the place live up to its name. 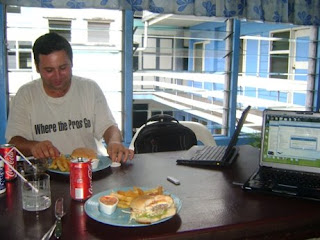 Koa and I went on to have dinner at Skippy's, during which he became aware that I had some TV Shows he was interested in getting. So we both whipped out our laptops, and had a little data exchange. The only thing that was weird was how weird it wasn't.

skippys has the best burgers!!