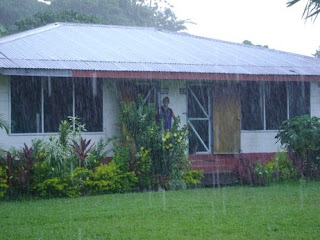 I blame the McDonalds. After last night’s contour cow session, Reverend Joe took me through the drive-thru, and my meal was upsized. Or maybe it was the thick coffee I had at the office last night. Whatever it was, I was wide awake at 3 a.m. waiting for the caffeine to finish coursing through my veins. And as the lack of sleep piled up, I could feel something in my throat.

This morning the throat issue had worsened. I was hoarse when I got to school early to make new changes to the class schedule so teachers could have their new schedules as soon as they showed up for the school day. Part of that croakiness in my voice was just morning grogginess. By Interval at 10:30, the pipes were all clear. I had three cups of tea, and I was good to go.

I have the year 12s for 4th and 5th period on Wednesdays, and that went pretty smooth for most. We did the Hokey Pokey when they slouched too low. I belted it out and it was great.

And then, in a flash, my voice was gone.

11.4 took their sweet time in showing up for 6th period, and by the time they rolled in, I had little left except hoarse yelling that sounded somewhere between microphone feedback and a yeti. And while Samoan students are shockingly polite compared to their American counterparts, my rasping was fair game.

I laughed “with” them as best I could, and a smarted teacher would have given up. But I rarely afford my body such mercy, and today was no different. Even as the smart alecks in the corner started calling out, “Adrian!” in surprisingly culturally literate impressions of Sylvester Stallone, I continued.

During points in the lecture when I stopped talking (bellowing?), I realized I was competing with a lot of noise, which was the reason for all the yelling. But my class was quiet. It turns out the 10.1 class was in the Great Hall, just outside my classroom, wailing and rhythmically tapping sticks and rulers on the cement floor.

“What are they doing?” I asked my class in a sandpapery whisper.

“They’re practicing for Culture Day,” came the answer. Culture Day is 5 weeks away! You can’t do that on the balcony, buddy?

But I was unrelenting. I was going to finish this Intro to Word Processing lecture, come hell or high water.

And then came the high water. It started with a burst of thunder that seemed no farther than a couple hundred yards in the distance. And then buckets of pouring rain. My roof is a bit more insulated than the fales in the training village, but it’s still not much. And hell if pouring rain doesn’t create a roar.

The class could not have been more entertained. Between their mocking hoots and hollers, they found the drumming from downstairs contagious, and that clap of thunder was, I admit, pretty fantastic.

So at the end, I announced next week’s test and apologized for class and applauded them for bearing through it, and they started applauding. And it turned out that with all the noise, we hadn’t heard the bell ring. It was quite a day.

I hope you’re finding your own low sexy, Chewbacca tones. Pictures below. 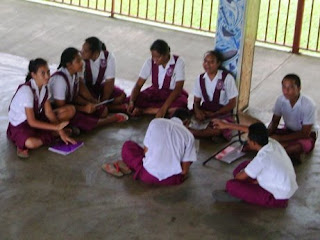 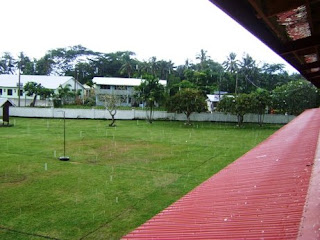 Rain on a hot tin roof. 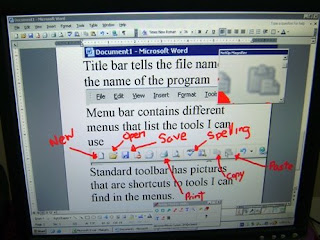 I forgot to mention that I my PowerPoint presentation was on the flash drive that the other computer teacher borrowed yesterday and didn't bring back today. I like this picture. Reminds me of one of those Far Side cartoons where an animal writes bizarre, diabolical, misspelled notes. 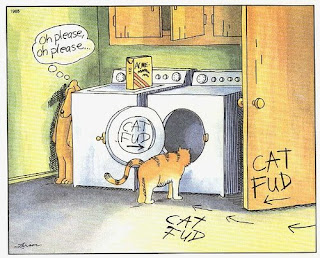 One of those Far Side cartoons where an animal writes bizarre, diabolical, misspelled notes. 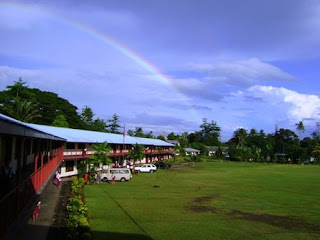 The rainbow over my school this morning. The calm before the storm.

Hi Matt!! Love the blog. Samoa looks beautiful. Sounds like you are having a great time!

hey matt! glad to see you're putting your "cut and paste" skills to good use. if only ecivix knew how expansive your computer skills were...hahah.

lovin' your pics of the lavalava.