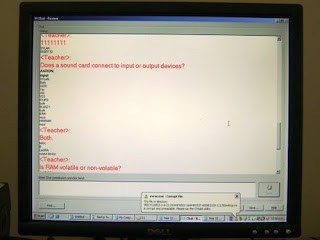 America Online made its first appearance in our house in 1994. I remember at the time I’d heard the catchphrase “chat room,” and the basic concept seemed easy enough to understand. You type, you wait, you read, you respond, you wait, etc. It’s one of those things were the user interface is so intuitive that it makes you wonder how this is any sort of technological advancement. Shouldn’t someone have thought of this years ago? I had a similar experience today with my year 12 and 13 classes.

Prior to today, I had used a function on NetOpps that made my computer screen appear on all of the students’ computers as the means for my year 12 quiz reviews. I would type a potential quiz question into notepad, and then they would have to write it down in their notebook, come up with the answer, and then raise their hand. The first group got a point, and we’d move on to the next question.

Today I was doing a quiz review with my year 13s, which is a much smaller class and playing large scale games feels unnecessary. So in adapting the game for them, I came up with the idea of opening a chat session, which NetOpps is also able to do.

Getting them to participate in the chat session was surprisingly difficult at first. I typed in the box first, and it appeared on their screens. Then I made Sinaumea do it, since he was sitting right next to me. But that was like pulling teeth.

“Type something in the box.” No response.

“Anything. ‘Hello.’ ‘Mālō.’ Whatever you want. Type it in the box.” No response.

Finally I reached past him and typed it myself. Then I went to Tui, who was sitting next to him. She’s had computers before, and see was ready. She typed, “Hallo there!” By then, the ball was rolling and Kate and Marie were starting to get the gist of things.

So then I started typing in questions. It took about 2 questions. And then Pandora’s Box was open. It was like mid-1990s America Online all over again. It’s such a weird, exciting thing to type something and have it appear on everyone else’s screen.

My year 12 class was a little quicker to pick up on the concept, but the same Pandora’s Box thing happened again.

Marie in my year 13 class was the first to veer a little off task. She dipped her toes in the water of online inanity with succinct nonsensical statements like, “Pink bunny.” She’d type that in when everyone else was answering the question. And she had to know the rest of us would see it on our screens, but when I called her out, she got a look of satisfied surprise, as though up to that point she hadn’t believed the chat thing to be true.

Amanda, who is an overachiever in my year 12 class, stayed right on task. But there was an elevated level of tension and excitement. Amanda can get lost in the sea of other overachievers, but when her group was the first to respond correctly to a question, there was giddy, out-of-breath laughter. It was funny.

And then, of course, there were Matthew and Peresetene (funny that Matthew and Amanda are both in my year 12 and both were worth talking about today), who found it necessary to explore the boundaries of the chat room medium by sending swear words. I may not be up on all of my Samoan swear words, but I can recognize the basic ones. Nice try, kids. I’ll see you after class.

All in all, it was one of the more memorable days in my year 12 class. The only drawback is they aren’t copying the questions into their notebooks, so they have no way to study the questions after class. Oh well. 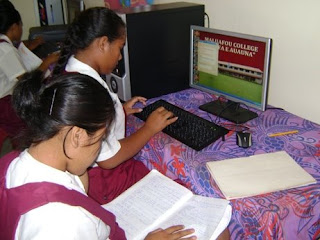 Year 12 students sit 2 to a computer... So the system that most partners adapted to was one would do the typing while the other would look through notes and figure out what to type. 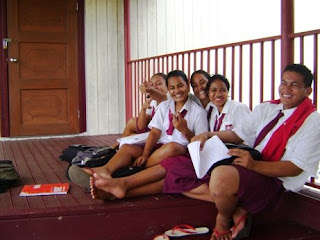 These are year 13 students hanging out on my stoop in the middle of the day. I was on my way out to pick up my 11.4 class, and these goof balls are sitting around outside my door waiting for school to finish. Must be nice to not have anything to do.
Posted by Matthew at 9:04 PM

I remember when I first joined MCI and they had MCI email - the slickest messaging in the industry in the mid-80s. I could compose online and get a response within the same day....even international. WOW.