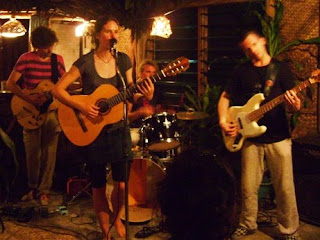 Mel Blanc used to do the voiceover for the Berkeley Farms radio ads, and I find myself in the same awe. Twice in as many nights I have gone to see live bands play real music in and around Apia. Either one of these bands would be a special occasion, but twice in two days seems excessive. Shouldn’t we be rationing this stuff?

Once again, I was at McDonald’s when I got the call from Erik yesterday afternoon. “What are you doing tonight?” He asked in a tone that implied the world might be imploding.

“I got nothing.” I replied.

“There’s a German band that’s going to be playing live tonight at the Rainforest Café.”

I should let it be known that the Rainforest Café in Apia is NOT a part of the Rainforest Café chain at where we went for Jenny Schwartzkopf’s 21st birthday. Rather, it’s an independent, upscale restaurant on the shores of Apia Harbour (Yeah. I said Harbour.). So I went.

In English, the name of the band was The Busker Princess and the City Pirates. In German it was Die Kleingeldprinzessin und die Stadtpiraten, which is pretty hardcore as far as German goes. In any case, I showed up and they were fantastic. By my calculations, if you add Jen and Derek plus Nena plus Manu Chao and throw in just a pinch of Nico, you get Die Kleingeldprinzessin, Dota Kehr.

I might add that she had a certain way of making contact with the audience that was a bit reminiscent of Marie De Salle. In any case, they billed themselves as “an original combination of German lyrics and Bossa Nova/Pocket-Swing sound.”

It was like absolutely nothing that I’ve heard live in the past 5+ months; i.e. brilliant.

Tonight was a completely different beast. A bluegrass quartet from Bowling Green, OH had been commissioned by the Kennedy Center to come and do 35 days of music and music education in the South Pacific. They are playing a concert on Thursday night, but the Peace Corps and some other Americans had the pleasure to share dinner and a sneak preview at the Chargés-Affaires’ house this evening.

I admit, the bulk of the evening was eating the caterered dinner (In which I am ready and able to participate at a moment’s notice.). It is always nice and rare to chat with Americans who are passing through. And in addition to the 4-piece band, who were really fun to talk to, we had about 15 seamen from the U.S. Navy who also happen to be in town.

So we ate and chatted about our disparate challenges in the workplace and smiled at each other as best we could. And then it was time for the band to play.

They only played 2 songs, but you hear 10 seconds of bluegrass, and for a moment, you’re not in Samoa anymore, Toto. Over that rainbow you fly, fully aware of the dessert of vanilla ice cream and strawberry jam that tastes just like crunchberries.

And for a moment, you’re there. In America. At the nightclub. Thinking you’ll order a Pabst for your next round, just to change it up. The harmony setting the tone, the chord changes so familiar, the halogen lighting just right. And there you are, caught in a dream, not wanting it to end, and heading back down to earth all at the same time. 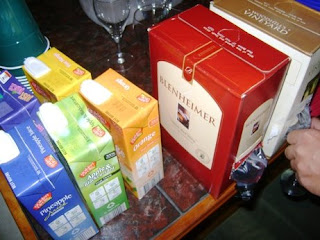 Juice next to boxed wine, which would have absolutely tortured Buster Bluth. 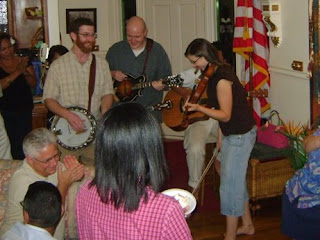 The Student Loan. The bluegrass band who we all came to see. 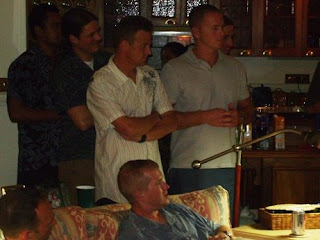 Naval officers who were there to judge?
Posted by Matthew at 10:15 PM

Happy Birthday! No, it doesn't really go with your content yesterday, but what the heck! It's your birthday so anything goes! I will miss celebrating with you! Love you. Kaky

Lots of music this week. The perfect birthday present for you!

I'd like to join the partay. Happy birthday Matty!

Manuia lou aso fanau!
Happy Birthday my friend, we miss you back here.