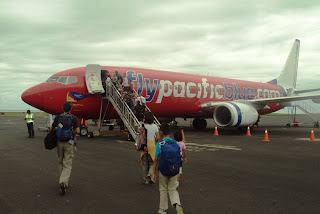 During training, it took me a while to realize my host family was taking me on meandering, seemingly pointless drives in part to flaunt the fact they owned a car. As Samoa has become more developed, car ownership has also increased, but it’s still pretty rare. And since local travel is so limited, I was surprised when Asolima told me last May that 30 people from Fausaga were visiting Australia for a month in August. As it turned out, the 30 people were mostly youths who were going to do some cultural dancing as a means of fundraising for the local church.

Travel is by no means unheard of in Samoa, although it seems like most people only go to New Zealand, Australia, or another Polynesian island. One of my students, Marie, has a mother who’s Tongan, and her family goes to visit there every so often. Another student, Filifili, has embarked on a number of “missionary” trips to places like Hawai’I and Vanuatu.

Over the past school year I got used to a trend where a high-achieving student would notify me that s/he was leaving for New Zealand for a few weeks so I would know not to expect him/her in class. And then a few weeks would pass by, and then a few more, and that kid would never be heard from again. This always leaves a bittersweet feeling in my gut.

It’s somewhat popular for Samoan nationals to leave in December and return in January. Since there is an influx of people visiting Samoa who enter the country in December and leave in January, airlines offer special deals to people living here so they can fill seats on the planes that have to return to New Zealand/Australia/America. It’s similar to being rewarded for having a commute that goes against traffic.

There are 2 main airlines that fly out of Faleolo international airport: Air New Zealand and Polynesian Blue (there are more, but these are the main two.). I’ve flown both, and you could not pick 2 airlines at farther opposites of the “frills” spectrum. As far as I can tell, Air New Zealand has a fleet of flying palaces with courteous staff and touchscreens on the back of every seat. Polynesian Blue, on the other hand, is akin to flying in a sardine can. They take “no frills” to new lows. No complimentary beverage. No peanuts. Cranky crew members. But the fare are dirt-cheap. You get what you pay for.

Anyway, I think there may be a tendency among PCVs to underestimate the travel literacy of Samoans. Recently, a volunteer travelling to New Zealand’s south island was given a sweatshirt by his host family. It’s summer in New Zealand, and the sweatshirt seemed unnecessary… until the guy arrived in Christchurch. Then he was thankful. 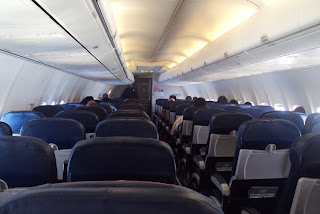 Empty airplane to Sydney the morning after Christmas. 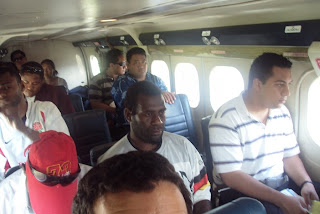 Samoans and a couple Fijians on the airplane to American Samoa. 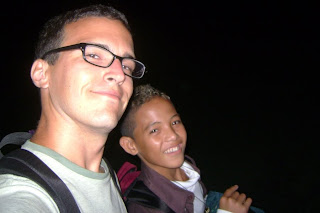 On my flight to Auckland last May, one of my year 9s, Sue, was on my flight.

Labels: Cultural Exploration, Off the Island

Alot of those kids who leave for NZ/Aus are most probably finishing their schooling there, like my cousin who lives with my mother. The qualifications at Samoan standard are still seen as lesser than those in NZ/Aus.