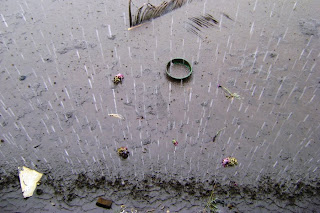 In the materials the Peace Corps sends to prospective volunteers, it mentions Samoa’s two seasons: the rainy season, which lasts from October to April, and the dry season, which runs May to September. These two terms, “rainy” and “dry,” are completely relative. More accurate names for the two seasons would be “the slightly rainier season” and “the slightly less rainy though still pretty damn rainy season.” I working on getting the calendar changed.

Just as in regular school, much of the learning we did during training happened outside the classroom, and I feel like everything we needed to know about rain in Samoa was imparted to us early on. During our first week at Apia Central, I was still slightly jet-lagged, and I remember waking up in the early morning hours to hear the torrential downpours in the courtyard. I swear I thought it was gardeners power-washing the roof.

Another idea we picked up rather quickly is Samoans seem, for the most part, largely un-phased by the rain. People may congregate under overhangs during a strong downpour, but for that light-to-medium rain, people just go about their business.

The Samoan word for rain is timu. Rain is often described the way we would in English: timu tele is lots of rain, timu malosi is strong rain. But there’s also timu moe, literally “sleep rain,” rain that’s so strong there’s nothing else to do but sleep.

And then there’s timu mea.

At our Early Service Conference, a number of volunteers reported hearing other teachers use the term timu mea to describe a strong rain. To our innocent ears, this made sense. We quickly went to the translation “Rain thing,” which sounds ominous enough. And why would there be reason to think anything else? Nice old ladies at my school use the term timu mea.

But taking this shared knowledge back to school and using it ourselves resulted in laughter from the other teachers. There were chee-hoos and suggestive eyebrows.

See, while the term mea innocently translates to “thing”, it also slangly translates to “sex”. Thus, similar to timu moe, timu mea is “sex rain,” the kind of rain where there’s nothing else to do but do The Deed.

So we stopped using that term. But the rain continues. 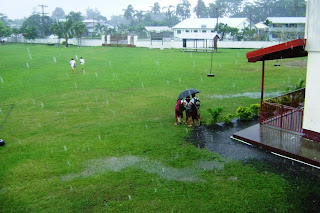 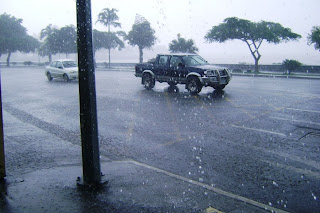 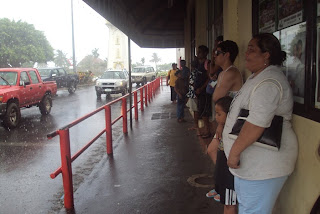 LMAO that was the funniest thing I've read since 2010 began! Thanks again Matt and please don't feel bad. I myself hate that word mea.