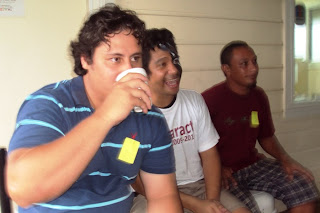 My friend Chris is here visiting. He and I were half of the foursome who lived in the Taraval apartment in San Francisco, and now he’s still working at the job from which I was laid off back in March 2008. My parents came to visit, and it was great to see them, and my sister came to visit, and we were our kooky selves. But Chris’s visit may be most interesting in terms of his ability to see the contrast between my lifestyle before and my lifestyle now. More on that on Sunday.

I tell you all this because Chris and I are both unmarried twentysomethings sifting through the fog, trying to figure life out. And just the same, there is a (small) contingent of Samoans who fit that same bill.

Recently a bar opened next door to Paddles along near the wharf, and word slowly spread that all cocktails were $5 on a particular Wednesday, and so I showed up with a few other PCVs in tow. The place was abuzz with a who’s who of young working Samoans. Some were in uniform, some were in business casual, a few of us stragglers were ragamuffined to the nines. We drank margaritas and chatted and avoided the rain. There were the computer engineers from CSL, the cub reporters from Samoa’s various newspapers, the young professionals from the budding telecom industry. All of them letting their hair down on a Wednesday night.

This is not the typical Samoan experience. Back in the village, it’s rare to find a woman who doesn’t have children, let alone one who isn’t married. Just as my Facebook updates seem to be awash with estranged high school acquaintances announcing weddings and child births, so too seems the Fausaga news cycle. With each visit back, Asolima gives me the low down on who’s expecting and who’s with whom.

In Apia, the tune is closer to my range, albeit to a rhythm I’m not accustomed. There seems to be a small subculture of young people who’ve bucked the trend of tradition, who are trying to piece together the shape that the rest of their lives will take.

In his book “Bowling Alone,” Robert Putnam chronicles the demise of cohesive social groups and America’s tendency toward a more individualized culture. He talks about the membership decline seen by social groups like the Lion’s Club and Rotary. This trend is seen nowhere in Apia. Rotoract, Rotary’s youthful equivalent, is seeing a steady growth in membership. Active young people are flocking toward church groups for young adults and clubs for young professionals.

And so it begs certain questions. Why have these young people betrayed a loyalty to culture, but have maintained a loyalty to one another? Why is there such a dichotomy between the twentysomethings who marry and have children at a young age in the village, and those who non-commitally march to their own beat in Apia?

I suppose I could give you a better answer to this question if I wasn’t wading through the haze myself. 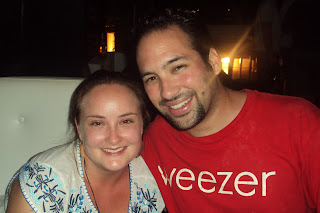 PCV Briony and my friend Chris from San Francisco. 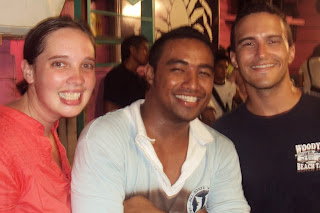 Blakey, Me, and DJ OK! This guy's a pretty big celebrity and we met him at Crabber's tonight.

Look at you kids boozing it up at the bar :) Like old times. Sigh.

Have you seen Bend it like Beckham?
you know that scene towards the end, after the wedding where the older sister (Pinky) turns to younger sister (Jess) and says, "Don't you want all this? I mean its the best day of your life, innit?"
to which Jess replies, "I want more Pinks."
the twentysomethings in Apia can be likened to Jess, who wants to sit on the sideline when you can be out on the field playing the game?