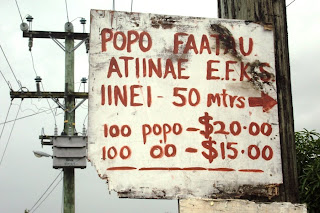 Linguists have discovered many similarities between different Polynesian languages. The Samoan S and V are very similar to the Hawaiian H and W respectively; thus, by some theories, Savai’i and Hawai’i actually have the same name. The Maori Wh and K bear striking resemblances to the Samoan F and komaliliu, the glottal stop as marked by an apostrophe, and thus many Maori words start with Whaka- the same way many Samoan words start with Fa’a-. There are many of these overlaps, but Samoan has an overlap within itself: depending on the circumstances, Ts and Ks are interchangeable within the Samoan language.

When writing in Samoan, T is almost always used. My students often write in K, but on any official document— newspapers, posted signs, governmental documents, etc.—everything is written in T. For the most part, my Samoan dictionary uses T almost exclusively.

K, on the other hand, is almost always used in daily conversation. My teachers, my host family, my students all talk to each other in K. Culturally, K is seen as informal and spoken by the masses. It’s folksy. Also, all slang and profanities use K. Just as it’s inappropriate to write a letter to the editor in K, it’s just as faux pas to swear at your enemy in T.

For the most part, Ts and Ks never cross. When you’re speaking in K, you only use Ks; when you’re speaking in T, you only Ts. Although there are a few exceptions. Panekeke, a so-called “borrowed word” that essentially means “pancake,” is accepted as part of the T language. In fact, converting panekeke to panetete is seen as somewhat elitist and aburd.*

Then again, T is generally seen as rather snobby. One of my Samoan friends, Esther, told me a story about a conversation she and her siblings had with their mother shortly after the mother received a job offer at the national hospital. The family was in the car one night, and out of nowhere the mom said, “I’m going to start speaking in ‘T’ from now on.” According to Esther this news was met with snickers and rolled eyes. “Yeah, whatever, Mom.”

With that in mind, it’s a bit controversial among volunteers that all of our Peace Corps language training is in T. On occasion during training, I would try on some K with my host family. They were not happy about this. As their revered palagi guest, I was supposed to command respect by using T. Asolima told me once with grave sincerity, “You don’t use K.” Yes, ma’am.

But that’s largely not the case; particularly with volunteers who live in more rural sites. For the most part, conversationally at least, the entire country uses K.

* Incidentally, it’s become a bit of a parlor game between members of Group 81 to come up with the most absurd K-to-T equivalent. The only English equivalent I can think of would be writing out 4-letter-words in an extremely refined calligraphy.

Speaking 'T' is so lame when you're hanging out. Everyone around you is revelling in 'k' so keeping up appearance is much harder. My grandma bashed us for talking 'k' around the house, so we'd only do it at school and everywhere else.

Hey! What happened to that guy who used to post every day? I miss him!

Hi Matt. Great post as are all of your other posts. Just wanted the clarify that 'T' becomes 'K' in words that are formally spelt with 'T' but the reverse is never true. For example, 'panikeke' is its formal spelling hence it can never be 'panitete' (no such word). Another example is 'kilikiti' where 'k' can never become 't' but 't' can be 'k'. Keep up the good work.

i love this cultural exploration. it's so true and a given for islanders when they speak but when asked about it....we give a "kailo pau a" answer.