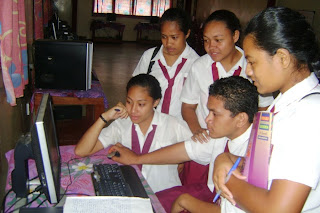 While Chris was here, we reminisced about our first experience with electives in the first year of middle school. Back then every fifth grader had to choose between playing an instrument in the marching band or attending “pop singing” classes once a week. Chris chose to play trombone. I chose clarinet. “Wait. You didn’t choose pop singing?” asked Blakey. No Blakey, I did not choose pop singing. In sixth grade the frequency of the elective period increased, and the options grew wider. And so on through the rest of middle school and high school. With this conversation fresh in my mind, I sat in on the year 12s choosing their electives this morning.

At my school, there are no elective courses until year 12. I don’t know what the students experienced in primary school, but I figure they didn’t have much choice in their education there either. Here in years 9, 10, and 11, students are all in the same class for each period, and within the weekly schedule is a mix of English, Math(s), Samoan, Science, Social Science, P.E., music, and computers (only for year 11 this year). But once they reach year 12, they have 2 “option” classes.

The meeting took place immediately following this morning’s assembly. All of year 12 gathered in the back of the assembly hall as Bernie, the head of the business studies department introduced the meeting. Before too long, a group of 10 students from year 11 came and sat in the back of the group.

Here in Samoa, it’s not uncommon—in fact, in some places it’s quite common—to go directly from year 10 to year 12. At St. Joseph’s college here in Apia, I’m told they don’t offer year 11. Blakey reports her school has a very small population of year 11s relative to the size of the other years. Here at my school most students take year 11 except for a handful of top performers. And I’m pretty sure that the actual skip happened this morning when they walked from the 11.1 classroom to the assembly hall to sit in on the year 12 elective meeting.

In any case, the meeting agenda went as you might expect: a teacher or the Head of Department from each subject gave a brief presentation on what the class would study over the year. When it was my turn, I was brief. I had all of them in year 11 (or 10) last year, so they had a good handle on what to expect, and I was bored and wanted the meeting over more than the students I think.

That said, there were 3 crowd reactions to what I said:
After the last speaker, the students split into 3 groups: Accounting, Science, and Art/History. In terms of who will actually be in my computer studies class, this meant very little. Both Accounting and Art/History students can take computers, so I won’t know who’s actually interested until Monday.

I can tell you that about half the group chose Art/History, and of the remaining students, more than half chose Accounting.

And after Interval, all the students headed back to the assembly hall for a little pop singing. 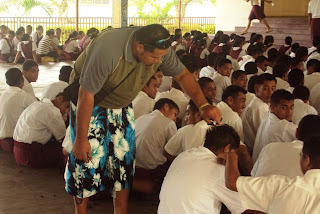 Mandatory haircuts for boys whose hair who exceeded regulation this morning. 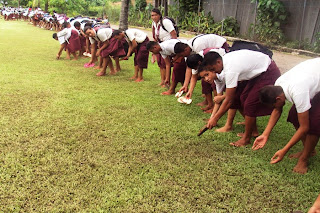 Students raking the grass with their flip-flops yesterday. 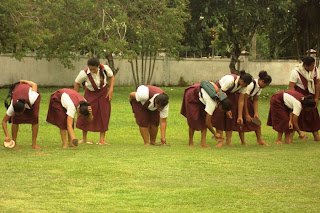 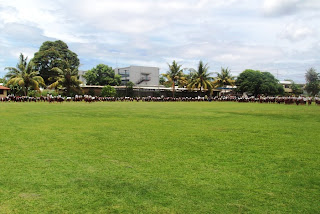 you didn't quote mom in your title.