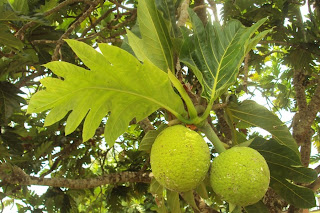 On the bus from Apia to the airport, my dad looked out the window behind me, pointed, and asked if what he was pointing at was a breadfruit tree. There are lots of trees lining the road from the airport to Apia, so at first I tried to discern which tree he was talking about, but then I thought the better of it and simply replied, “Yes.” Even if my dad wasn’t a seasoned amateur horticulturalist, chances are good he was pointing at a breadfruit tree because Samoa is full of them.

Of course, that’s not a coincidence. Breadfruit and taro are the Samoan equivalent of wheat and potatoes. It’s rare to sit down to any meal in this country without seeing one of the two on your plate. ’Ulu, as its referred to here, goes with just about any meal—much like bread of the non-fruit variety.

Breadfruit is indeed a fruit. It grows on trees and has a “pit” in the middle, although the pit is a lot bigger than that of a peach or nectarine, and it doesn’t have the same rigid woody consistency. To eat it, you rip off a chunk—after roasting, it separates quite easily—and then tear that chunk into smaller bite-sized pieces, much like you might do with cotton candy. And the taste and texture is actually pretty similar to bread.

Like taro, breadfruit needs to be cooked before it’s edible. Were you to find breadfruit at your local supermarket, I think you could probably boil it. I’m not sure because I think just about every time I’ve eaten it here, it’s been roasted an umu, the traditional “samoan oven” in which lava rocks are heated in a fire and then placed around the food to be cooked. And incidentally, breadfruit leaves are often used (in conjunction with banana leaves and other leafy vegetation) to cover the umu, trapping the heat in and imparting the flavors of the leaves to whatever’s being cooked.

At a traditional meal, you would dip your bite-sized breadfruit pieces in miti, or salted coconut cream. Miti is the base of oka, a popular seafood dish, and so breadfruit is often served with oka, similar to how oyster crackers are served with clam chowder. Breadfruit is occasionally served in the staffroom during Interval at my school, and each staff member will receive a mugful of miti.

During training we visited the Ministry of Health, where they are trying to get Samoans to eat more breadfruit and taro. Over the last couple decades, bread and rice have become the carbohydrates of choice because of their convenience. Yet both lack the natural vitamins and minerals that are plentiful in breadfruit and taro.

So eat your breadfruit, kids. 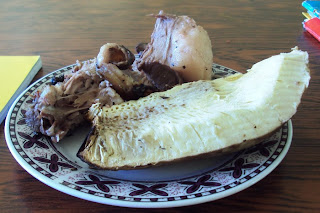 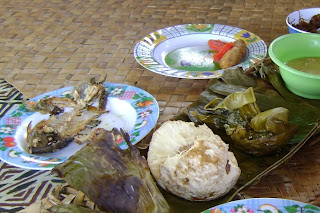 Breadfruit served whole next to palusami, which is coconut cream wrapped in a taro leaf. 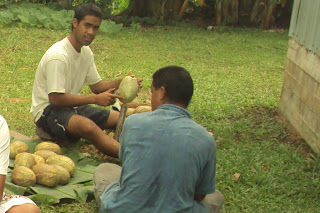 My year 13 student from last year, Sinaumea, peeling a breadfruit to go in the umu. It's important to not peel the entire breadfruit, as it will lose all of its moisture if you do. Instead, the idea is to peel most of the skin, but leave some behind. It's kind of the equivalent of, instead of using the tip of the crayon to color, you want to turn the crayon on its side and give it a lighter shading. Make sense?

When Captain Cook was out sailing the world 'discovering' Australia, NZ and the islands. He pontificated that breadfruit was the answer to the dreaded scurvy which plagued his crew. So he got some and took to them all the way to the Carribean Queen.

What do you mean "my dad wasn’t a seasoned amateur horticulturalist"?

OMG Ulu & Miti are a Sunday Feast favourite! Thanks Matt. Unfortunately Samoans are becoming lazy at cooking the umu and if they don't keep it up they will rely heavily on imports of rice & flour - which result in increasing prices. Gone are the days when the locals could pick crops from their lands because the lands are becoming smaller and families squabble over land inheritances.

My husband and i asked my Samoan Mum what breadfruit is...she responded, "it's a vegetable"! Oh! right! How could we of thought it was some kind of fruit??? hmmmmmmmmmmm.......i'm still confused! LOL!

In Polynesia, Samoans are known for preferring 'ulu really, really green. I bought a basket of them and even when I resorted to "when in doubt, deep-fry" I still found it too starchy and bland for my taste. Fortunately for me, the tree behind the crew house is in season and no-one else seems interested in that tree, so I've been able to pick them a little riper, to my Hawai'i-bred taste. Fingers crossed - hoping a few will get to the super-ripe stage. Then it gets sticky and sweet and is even better baked then fried in butter.

OMG! im pretty sure the first picture with the ulu and some oily part of the pig must be too much for one person..LOL I heard ulu (breadfruit) can be a good source of food which is similar to taro and others, it can well cause a discomfort to others stomach by eating too much.. or too much starch, may well add heaps of fat to those who loves them.
By the way, this is NOT a fruit, its considered to be cooked before you eat it.. fruits you dont cook them but to eat fresh and raw.. with breadfruit, in which I have no idea who gave the name..lol but its similar to taro and bananas.. go Ulus!!