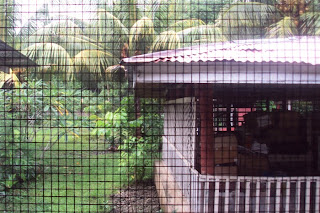 According to the Peace Corps, my job assignment in Samoa is teaching computers to high school students. According to Samoa, my job assignment is computer genius. As flattered as I am to take on this title, it can lead to a lot of disappointment on the part of Samoa. But not for a lack of trying. Every once in a while, I’ll dust off my little kit and get in someone’s car and make a house call. “Now, what seems to be the problem?”

One of the Indian missionaries, Apong, approached me this morning with a streak of urgency in his voice. “Matt, are you available this afternoon? The reverend at our church is having a difficult time with his computer.” At that point, my plans for the afternoon were lounging on my couch in my boxers, reading. So I agreed to look at the computer.

Apong and I started at my school at the same time last year, and it’s been interesting contrasting our experiences. On the whole, being a Peace Corps and being a missionary are quite similar. At the same time, there are key differences—you know, like Jesus. And the ability to drive. Apong kicked off the new school year by purchasing a used Hyundai. So after school—i.e. at 10:00 this morning—we piled into Apong’s car and headed up the hill to pick up his wife, Zorin.

When we arrived at his house, she greeted us with a breakfast snack. While she prepared the finishing touches, Apong gave me a tour of their small house, pointing out all of the furniture he built during the school break in December. As it turns out, Apong is an amazing carpenter.

After snacks, we headed down the hill to the reverend’s house. Apong knocked on the door. “Hey, we should have called. Oops,” Zorin said. Initially it seemed this house call would have to wait, but then the reverend’s wife Mata showed up at the door.

She was happy to see us, and she ushered us into the computer room. We switched on the machine. It booted up slowly.

Zorin and Mata got to talking about the problems at Zorin’s school. Though Mata is retired, she’s chair of the local Women’s Committee, and she still has quite a bit of sway in the community.

Apong and I scratched our heads as the computer froze halfway through the cold boot. I re-booted in Safe Mode and started a defrag.

The four of us sat and gossiped about teachers and pules and students and staff. Mata boiled up some tea. The defrag took over an hour, and eventually Zorin and Mata left the room. Apong picked up the guitar laying on the shelf nearby. As it turns out, Apong is an amazing guitarist. Self-taught too. He’s the kind of guy who picks and plays amazingly well, but if you ask him how to play a C chord, he stares at you blankly.

After the defrag, we ran an antivirus scan, which yielded nothing. We restarted the computer. It froze again.

4 hours later, we left the house with full stomachs and no idea what was wrong with the computer. I chalked it up to a dearth of RAM (256 MB), a virus the scanner wasn’t picking up, or heat and humidity.

Mata was grateful just the same. Another successful house call. “Take two of these and call me in the morning.” 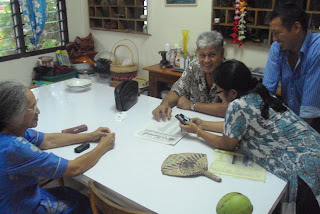 At the kitchen table with Mata, Reverend Keri, Zorin, and Apong. 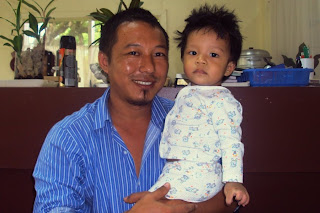 Apong and his 10-month-old son. 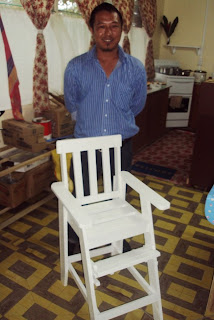 Apong built a high chair. "I've never actually seen one, but this is how I assume one would work," he said.

i love Apong and family!! How sweet!