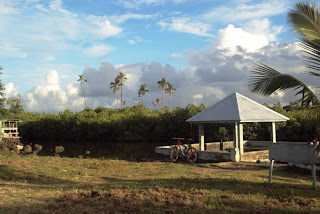 As Phil and I observed during our December trip to Fausaga, it seems like when we go back to visit, someone is assigned to keep us entertained. I’m not sure if there’s a concern we’ll fine village life dull or too slow, but for whatever reason, it will be the job of a sibling or cousin to pal around with me and suggest ways to occupy my time. It’s thoughtful, but it can get tedious after a couple days. So occasionally it’s nice to pop in and pop out before the freshness of the visit dissipates.

Upon arriving back in Samoa, Koa heard news his host-mother had a baby boy and had named the newborn “Koa”. With all this Peace Corps hoopla this week and school starting next week, there was little time for Koa to visit his namesake. But as it turns out, Koa’s host-father is a taxi driver, and he offered to take Koa down to the south side of the island to Fausaga for a short visit this afternoon. Koa invited me to tag along, so I did.

On the way over the mountain, we stopped at Myna’s Faleoloa to pick up a few loaves of baked bread. Sodas and banana chips were purchased for the ride, and we set off. It’s amazing how much shorter that drive is in a car rather than a bus. We rolled into Fausaga 45 minutes after I’d left my house, which is pretty short considering a bus ride averages between 2 and 3 hours.

Popping in unexpectedly—I texted Asolima to tell her I was coming about 30 minutes before we got there—gives a pretty good snapshot of village life on a lazy Saturday afternoon. My house was the usual social hub. Phil’s host-father was at the kitchen table chatting with Asolima. Dan’s grandmother was watching “The Lion King” in the living room with my host-mother Mele. Akanese kept begging to go swimming in the village pool, and the baby’s nose was runny (as always).

Fialupe was there! Early blog-readers will recall the controversial Fialupe who Asolima introduced to me one morning with the gruff, “I hate that girl.” Back then, she was a miserable 19-year-old used to “fast lane” in American Samoa who’d been forced by family obligations to move here. A year later she’s adjusted like the rest of us, and she seems happier. I think she appreciated that I remembered her name.

Akanese showed me how she’s learned to ride a bike. Asolima fried up some chicken. I played informal volleyball with a couple kids who live nearby. And then it was time to go. I was sent home with taro and esi, and I assured my family I’d return soon. As long as they promised to keep me entertained.

I hope you’re well. I accidentally left my camera in the car while we were in the village (Don’t worry. I got it back when we left.) , so I was unable to take pictures this afternoon. Below are some old pictures from past visits. 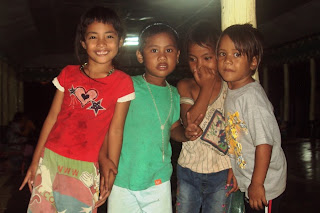 Akanese and the gang at Catholic Bingo. 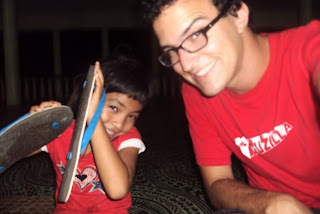 I think this picture is so dorky of both of us. And therefore awesome. I wish it was in focus. 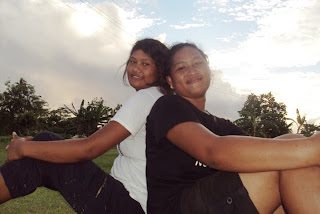 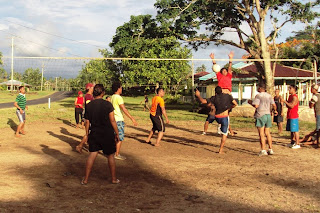 this is fun. fun fun fun.

you made me think of In-and-Out burger, which I know is totally unrelated. now i am hungry.