I've Come to Look for Americans 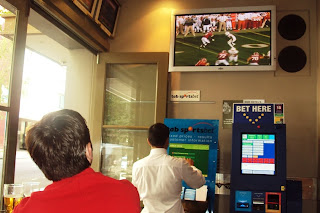 As I’ve said time and again over the last week and a half, Australia gets its fair share of tourists from all over the world, and Americans make up a decidedly small percentage of that group. Since I arrived here, it seems like every other person is either Brazilian or German, and the Dutch would rank an impressive third. But I’ve known many Americans who have spent time in Oz, and I assume there must be a ton more. But where are all these people? Well, all of us Americans came together today.

With Aussie TV, it’s been difficult to keep abreast of American sports, but anyone who knows Luisa knows she can’t walk past a sports bar without checking out what’s on TV, and today she noticed the BCS Championship was on live. It was the middle of the second quarter, and we had some errands to run—our trip is nearing the end, and there are souvenirs to buy—so we kept on.

But on our way to pick up new flip-flops for my remaining year in the Peace Corps, we passed another sports bar. Early 3rd quarter. After a quick look through the bookstore, we walked up two blocks to the flip-flop store. Done and done. From there it was a quick sprint back.

Now, I should note that had there been a team playing that either of us actually cared about, we would have invested a lot more time. But Texas and Alabama? Meh. We got there in time for the beginning of the 4th quarter, and that was enough.

And quite a 4th quarter it was! As they say, the enemy of my enemy is my friend, and after the Rose Bowl of 2005, I cozied up to Alabama. 3 Texas turnovers later, I was all smiles.

And so were many of the other faces of the room. There’s nothing like a football game to bring together a bunch of Americans, and after a year of watching rugby with Samoans, it was fun to be part of the exclusive group who understood the rules of the sport on TV.

When the girl two tables over snorted on Texas’s second interception, I felt like we were all one.

I hope you’re well. No pictures below.
Posted by Matthew at 7:00 PM