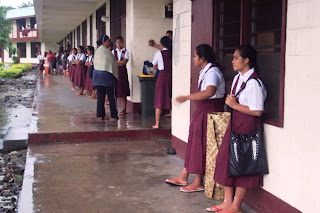 Nervousness and self- conscious- ness abounded on the first day of school last year. I was a rookie, and there was so much new stuff. There are a ton of parents registering students, the Welcome Back assembly, the staff room politics, the falas and salus. Living on the school compound with virtually no one around, the first day of school took my social and professional life from 0 to 60 in a matter of seconds.

Cut to this year. The nervousness has all but disappeared. My only sense of dread was waking up at 7:00 a.m., and if anything, I looked forward to coming back and seeing students and staff for the first time in 2 months. Given we’ve had no meetings to discuss the schedule of classes, I anticipated long stretches of down time, and I made sure to bring my book. I put on my new watch, fed the cat, and marched out the door.

For one, the first week of school is traditionally a clean-up week. Though some classrooms are cleaned, most of the work happens outside: planters are weeded, the lawn mowed and raked, older boys come around the teacher houses with machetes to clear foliage. None of this could happen in torrential rain.

An even bigger complication is tap water. When it rains hard enough, the reservoirs overflow and mud gets into the tap water, and the water department shuts off the tap. Thankfully, school policy dictates we send students home when there’s no running water.

As the morning wore on, the rain continued its off-and-on pounding, and it became increasingly clear that very little student activity would go on today. The teachers met briefly, the bell was rung, we had a slightly-longer-than-usual assembly. The rain continued.

We met back in the teacher’s lounge, and it was decided we’d have departmental meetings and students would do clean-up work tomorrow. I asked my vice pule who else was teaching computers this year.

“You’re the only one,” she said. Apparently the guy lined up to be my successor, Loto, transferred to another school in the Congregationalist system.

So at my departmental meeting, attendance 1, we decided to read “The Girl who Played with Fire.” It was quite a productive day. 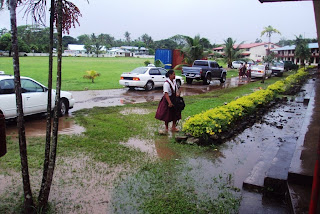 Showing up to school in the rain. 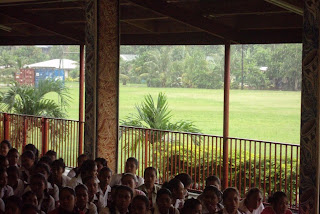 Rain during the assembly.