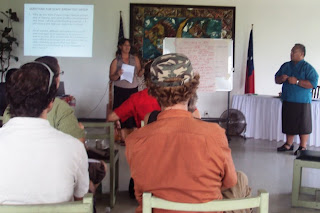 Without airing too much dirty laundry, let’s just say morale among Peace Corps Samoa is a little low. It’s been called a “funk” or a “slump”. Whatever it is, it’s palpable. Living in Apia, I get a fair amount of volunteers sleeping in my living room, and The Funk permeates conversations. The problem has expounded to the point management has noticed, and it became the focal point of yesterday’s Peace Corps Samoa All Volunteer Conference.

When volunteers come together in Samoa, they often treat it as a vacation or a holiday from their village, and so they tend to use the opportunity to let off steam. There’s a tendency to air frustrations about particular project aspects, and for whatever reason, people often respond with a “yeah, that’s lousy” response rather than a more constructive “what can we do to fix this” response. All of this has compounded, and the funk has been quantified on the annual site survey.

Now given the nature of the Peace Corps—high turnaround is built into staff and volunteer positions—the annual survey gives a snapshot of a particular moment, and by the time the picture has developed, things have inevitably changed quite a bit. We took the survey back around July 2009 before group 82 arrived, so there have already been changes, and a lot of volunteer concerns about job assignment and the need for their particular position may have already been remedied.

But there’s still the funk.

So yesterday became a sort of verbal Peace Corps lovefest. At one point in the day we broke into small groups to discuss ways to increase the feeling of effectiveness about our jobs, which in essence was, how can we get out of this funk?

Approximately half the attendees were members of group 82, who have barely started their jobs, and were caught a little off guard by the whole conversation. Yet they were able to offer some slightly more object observations of how they saw things coming in and how their initial experience could be improved.

Volunteers from 80 and 81 chimed in with a lot of ideas too. Some were basic—putting more effort into learning the language, investing time in Samoan history—and some were logistical—pairing each trainee with a specific “big sibling” volunteer who would be the trainee’s go-to for questions and support. But more than the actual ideas themselves, it was the tone of the conversation that felt different. It’s funny how brainstorming ways to feel happier actually makes you happier in itself.

After the small groups of volunteers finished presenting, staff members got up to present their ideas. The Peace Corps staff is mostly comprised of native Samoans, and many of them had Peace Corps or new a volunteer growing up. They rarely talk about those experiences, and it felt good to hear their support.

The day ended with Casey 80’s slideshow of pictures from the year. The last was a video of Country Director Dale reading the lyrics to Bobby McFerrin’s “Don’t Worry, Be Happy” into the camera. It was absurd and fitting at the same time. 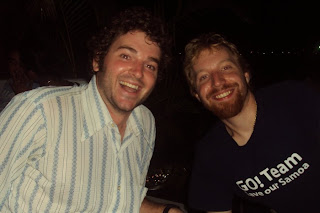 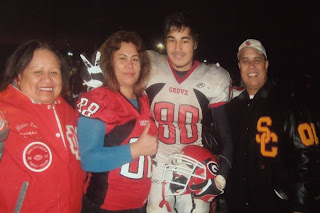 Photos from Garden Grove High School football displayed on the wall at Mari's Restaurant in Apia. Mostly I was happy to see the regalia of the man on the far right.

hope you get out of the slump soon.