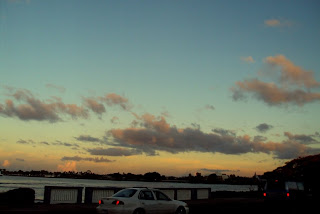 It’s been rainy this week, which has worked out conveniently because my fan stopped working. It’s also been quite inconvenient because there’s been no running water in my house since Sunday. And now that the rain has let up, it’s hot in my house and there’s still no running water. There were times in college (and after) when there were dirty dishes in the sink for a month, but in college there was also a host of fast food to aid in the kitchen neglect. In Samoa, I live out of my kitchen for nearly every meal, and this no tap water thing is not cool. Here are some other odds and ends from the week:
That’s all I got for today. I hope you’re well. Pictures below. 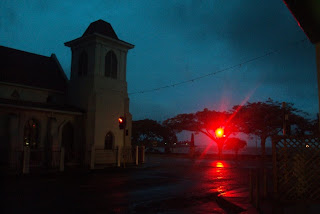 I went to the fish market at 5:45 a.m. last Sunday with 82ers Rachel and Lili. This is pre-dawn Apia. 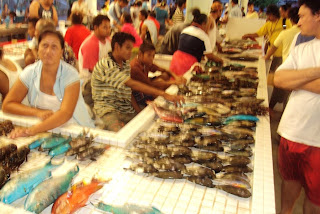 The fish market. It's the only picture I took, it's blurry. The lady here gave me a very dirty look once she figured out where the flash had come from. 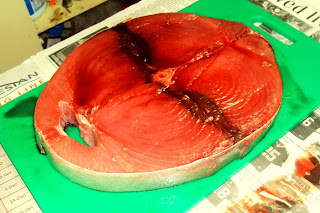 The cross-section of tuna I bought. 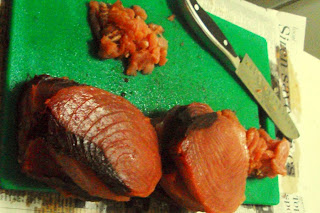 The cross-section of tuna carved into steaks.
Posted by Matthew at 7:00 PM

1) mmm tuna steak
2) i want to go to Australia (not just for bourbon, etc)
3) i love how Scout finds herself into the blog now and then.

I would have just sipped straight from the jug.

The people working at the fish market didn't seem to happy with me wanting to take photos either. The one exception was the person who wanted me to pay to take a photo. I found that odd because everywhere else we went, folks asked us to take their photo.

Matt, those Lizards are good luck.