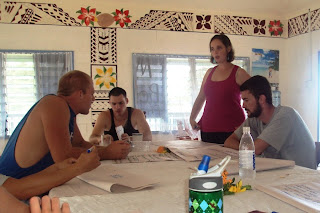 At the airport with Chris, I ran into the latest member of Group 82 to leave. The trainee-turned-volunteer expressed feelings of futility and guilt, neither of which I could blame him for. Looking down the long end of two years feels daunting, and there are a host of emotions that go along with that feeling. But since I left for Group 81’s Mid-Service Conference directly from the airport, the interaction only accented the contrast between the new group, which has lost a total of 5 so far, and our group, which still boasts all 13 members.

It sounds cheesy, but at this point, it really does feel like we’re a big family with all the love and dysfunction that entails. As much as the event had the feeling of a corporate retreat with sessions like “Obstacles and Strategies to Circumvent Them” and “Challenges and Rewards,” it also felt a lot like a family reunion.

Samoa isn’t such a big place that I don’t see most of these people fairly often, but it’s rare that we are all gathered in one place at one time. And the ethos of the group has evolved as we’ve become more familiar with Samoa and with each other. Shyness and awkward conversation has given way to coziness and goofy banter.

Then again, we all fall back into the archetype we’ve each carved out for ourselves. Dan is loud and walks the thin line between obnoxiousness and brilliance. Blakey blithely and assertively sets the group’s agenda. Supy tromps around with his shirt off spreading cheekiness and ka’a wherever he goes.

But as I said in yesterday’s post, there’s a lot to do. Just as it’s daunting to look down the long end of two years, it’s nearly as daunting looking down the long end of one. We all expressed frustration over how to bring about any lasting change at our schools. And as much as we’re psyched about the new year, there’s a whole lot of cynicism left over from last year.

This cynicism was all too well symbolized in the tsunami destruction surrounding the hotel. Manenoa Beach Surf is nestled between Coconuts Resort and Sinalei Resort, both of which were hit very hard by September’s tsunami. Many of us knew people from Fausaga who worked at these resorts (none of whom were harmed or killed), and we had made trips out to see Samoa’s high-end accommodations. There is a devastating quality to the sticks and building skeletons, and it was difficult to not feel a wave of discouragement wash over as I walked through a bit of the rubble.

Yet in that same vein, the infernal sounds of construction emanated through our conference meetings. Workers showed up early in the morning, already hard at work on getting the hotels back up and running. So I guess the conference was all about persevering through the shortcomings of last year and building the future on a more solid foundation.


I hope you’re well. Pictures below. 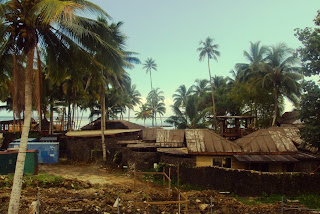 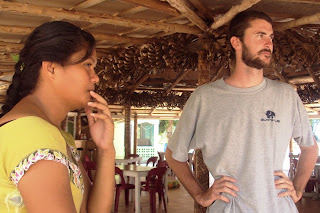 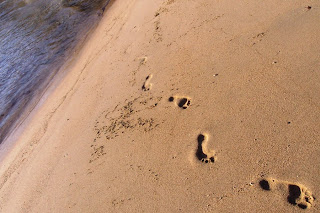 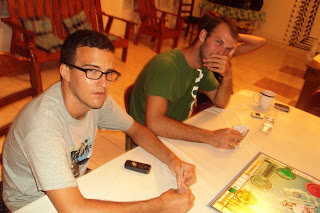 As you can tell by mine and Jordan's expressions, there were a few intense games of Sorry! last night.

I would like to have a Peace Corp teine if there is one in Samoa or an ex Samoa-Peace corp. Im Samoan and I live in in the US. I think when an American teine live in Samoa she is more understanding of a Samoan guy here in the US.
Also I do admire your contribution to Samoa. Let me know. I have always look up to the Peace Corp while I was growing up in Samoa. Im male over 40, Have my own business and own my home. Sole get back to me about the teine man. my email is alohastud@yahoo.com